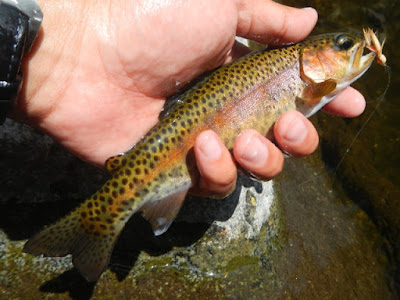 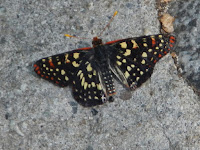 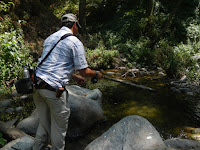 With the tides optimal today, the original plan to go back and fish the bay, but that plan was scraped because of various reasons.  So I planned to just stay home and watch the soccer tournament until I had a last minute bright ideal to fish for trout and try out my new bag from Mont Bell.  Chul, although planning to head out to the Sierras to fish some real trout water tomorrow, was up for some local trout exploration.

I think once we saw cars parked along side of the road before the parking lot, we should have known something was up.  Today was a zoo.  Since school is out on vacation, our trout rivers are now packed like a Tokyo subway station during rush hour.  There were a hell of a lot more people than we expected for an early Friday morning.

We headed downstream further than we had ever been, looking for a huge plunge pool under the waterfall.  Knowing full well that the water would have already been occupied by cliff divers, we still headed toward it just to see if it was worth fishing in the future.  In front of the falls, was a long pool that held several more-than-respectable fish.  We concluded that the huge pool must have monster trout in there, promising to return someday before the swimmers could ruin the pool. 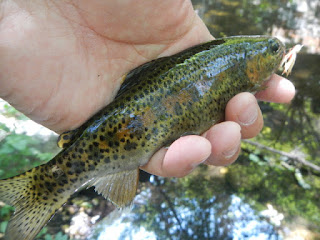 We bypassed the circus and moved downstream fishing pocket water along the way.  The fish were plentiful and aggressive but none of any significant size although much larger than the fish I was catching at the East Fork a few days prior.  Eventually the area became to wild and we were unwilling to bushwhack in the jungle.  Way too much poison oak here.  So we turned back and headed upstream to the divers.  We found a nice pool just before the divers and caught several fish here.  We moved on from there catching fish here and there catching fish along the way.  With dinner plans, we quit around 3PM and started to head out.  The hike in today's heat was brutal.  Fishing SoCal waters during the summer is like this, I suppose, but I never can get used to all the crowds.  I go to the outdoors to get away from people not to engage with them.
Posted by gourmetsportsman at 6:59 PM