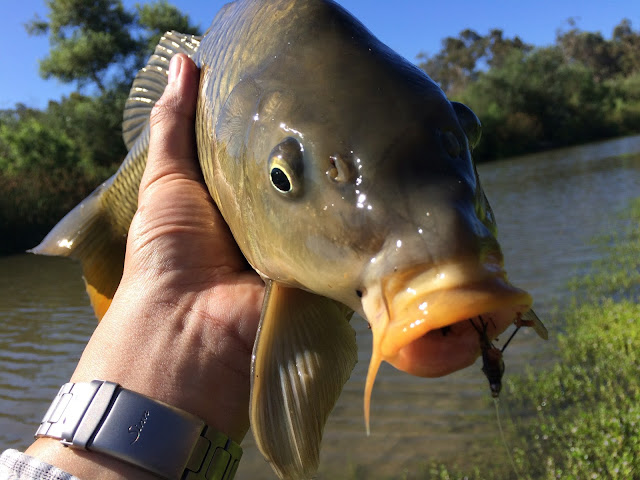 Woke up this morning with a hankering to fish, so I hit up the local brown water before the temperature reaches close to triple digits.  Water is murky and sight fishing was limited to the edges.
Posted by gourmetsportsman at 1:11 PM No comments: 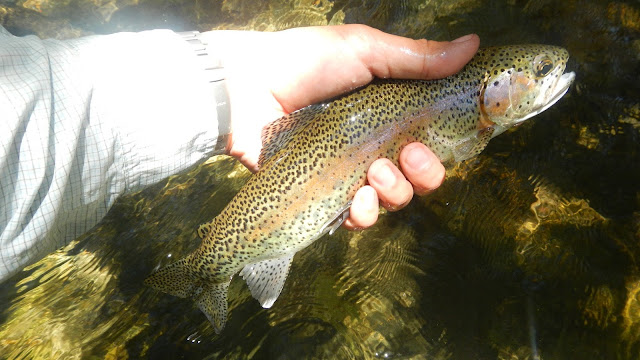 The original plan for this trip was to head out Friday late morning, hike into the canyon and fish the last few hours of light.  But things don't always go as planned as my fishing buddy was forced to work a few more hours than normal.  This forced us to hold out for the weekend traffic.  It also meant we'd be hiking in darkness and making camp well after midnight.  Even that didn't go as intended.  We only made it 80% of the way before pulling off the road and uncomfortably sleeping roadside in the truck. 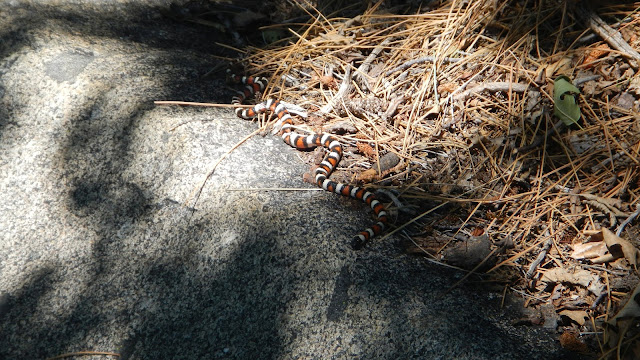 Saturday morning we awoke and left around 6am to our destination.  We hiked down the mountain and made camp and then breakfast before hitting the water.  By then it was already 10:30 and the heat was on the rise.  Having slept very poorly the night before, I was not on the top of my game.  It took no time for fish to rise to my dry fly but I simply could not connect with any as my reaction time was impaired from the lack of sleep.  On one run, I casted to an area I thought most likely held fish, as the current dragged my retrieved line toward me it got hung up on my net that was attached to my sling bag.  While clearing it, a football shaped 14 incher attacked my fly.  Of course with all that I was dealing with I could not set the hook. 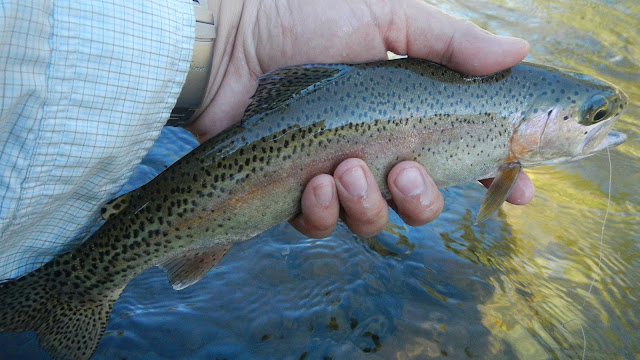 Growing increasingly frustrated we moved upstream.  There I found an area partially covered with shade and there I finally hooked up on a decent fish.  It fought hard and it was smart enough to use the current to it's advantage.  I did finally manage it into the net.  Afterwords we eat lunch and decided to head back to camp to rest up and take it easy during the hottest part of the day. 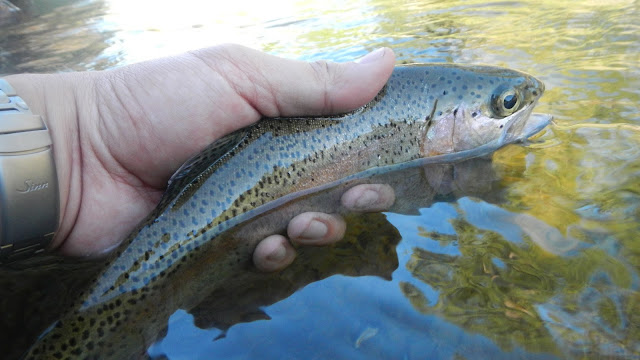 After a long much needed nap, we started to fish again around 5pm.  This time we decided to head downstream to an area that has in the past produced some serious evening dry fly action.  When we reached it it was already occupied with a spin fisherman. 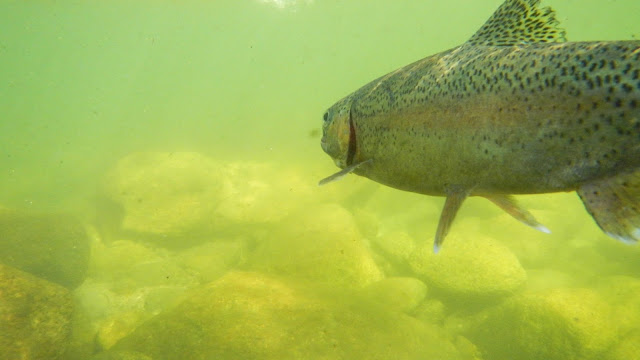 So we moved further down.  The evening proved very good for me and I produced a fish in every hole I thought I would.  Fish ranged from dinks to 11 inches.  All but the dinks were respectable healthy fish. 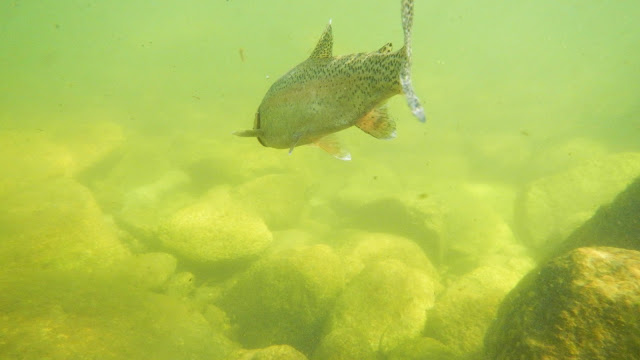 Moving upstream now we fished well past 8pm before calling it quits.  We headed back to camp for supper.  Not long after the meal we dove into our sleeping bags.  Exhausted from the lack of sleep and the heat of the day, I never realized I pitched my tent at an angle.  My feet were slightly elevated from my head causing my nose to stuff up preventing me from falling asleep.  Too tired to reposition my tent, I had to figure out a way to fix this problem.  After staring at my tent for what seemed an eternity, moaning about not wanting to re-stake the tent, I decided to lift the opening of the tent somewhat and kick pine needles and dirt under teh tent around the head area.  I entered the tent to see if that helped and it did and I was down for the count no time. 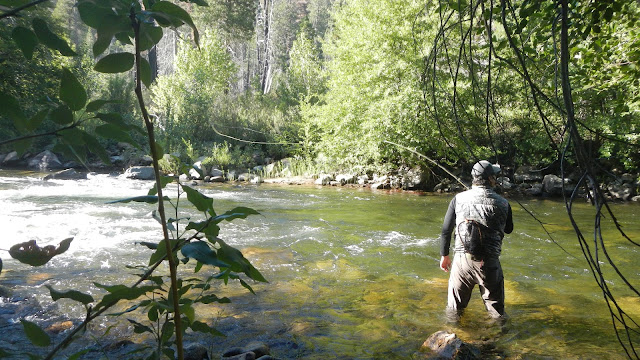 The following morning we decided to fish briefly so we would not be stuck climbing out of the canyon in the heat.  I gave a half hearted effort at fishing while Chul was trying his best to get a decent fish for the trip.  He missed a stellar fish and after that it was time to get out of there. 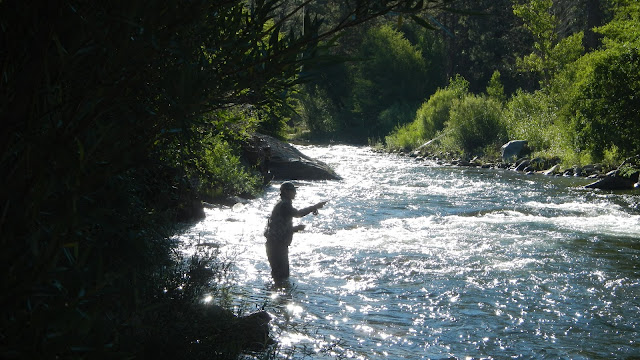 It only took us a hair over an hour to get back to the truck.  The trip was not quite as we planned and we missed out on the Friday evening hatch which I believe would have been spectacular if the next night's fishing was any indication of what we could have expected. 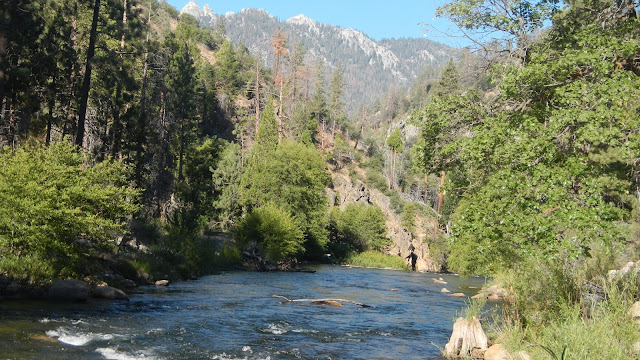 This trip produced no great slabs like it did last year but we did see a number of large fish hugging the bottoms.  None of which wanted to take a fly this weekend.  I feel slightly cheated by the whole experience and want another crack at them soon but with only hotter weather forecasted in the future it maybe unlikely. 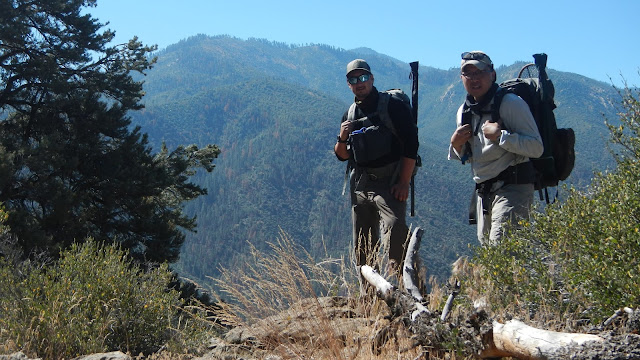 Posted by gourmetsportsman at 8:56 AM No comments: