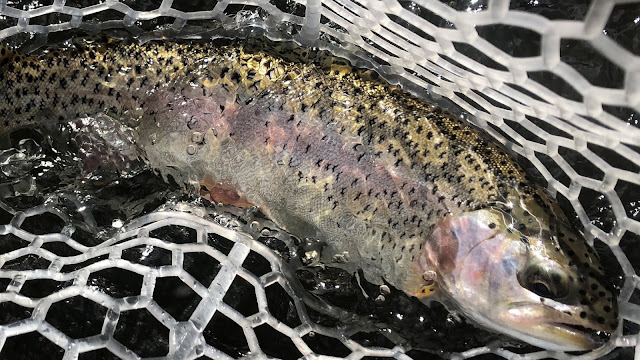 The decision was made to head up further north and see how one of my favorite waters was fishing.  It also allowed us to fish the Nevada side as well in case the California side was too busy (as it always is).  While in town we bought our Nevada licenses which seemed to take eternity because the computer system for whatever reason recognized my address as a foreign country.  After which we headed off to the water and after seeing all the crowds we drove further down the road to our neighboring State. 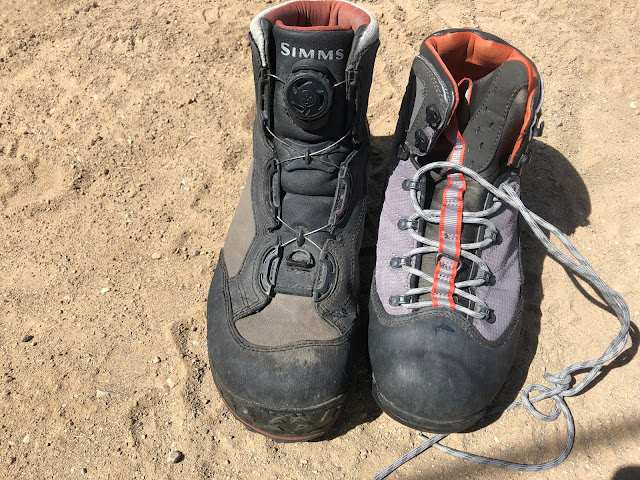 It's been a while since I fished this part of the river.  The last time was at least a decade or more back when the Sherminator and Joel were my regular fishing buddies.  Back when they were without kids.  It took me a while to recognize any of the water.  When we began rigging up I noticed that I mistakenly brought a mismatched pair of boots.  Initially I intended to bring both pairs.  My Rivertek boots are on it's last leg.  The soles are falling apart.  I glued them back together with aquaseal knowing that it was not an fix but rather a bandage.  I just wanted to get a few more outings with them before they are tossed in the bin.  So I wanted to bring my other pair in case the Riverteks die.  At the last moment I decided that since I wasn't driving I didn't want to bring so much gear with me.  I without noticing mistakenly took of one boot from each pair.  Jokingly I said "I look like fucking Punky Brewster." 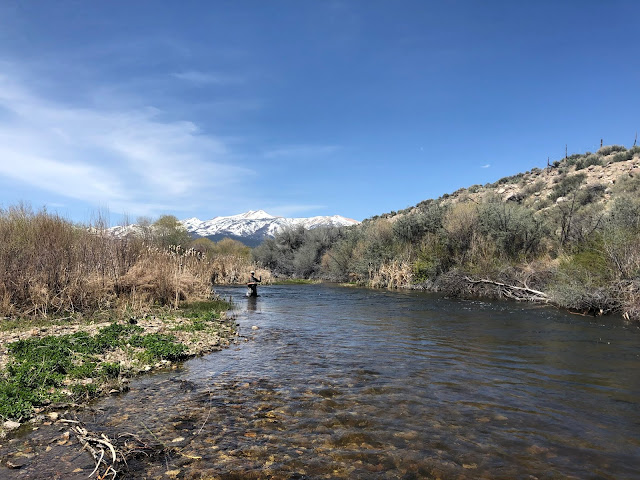 Trying to get to the water was a pain.  The river is now swollen with reeds and quite difficult to access.  This was never the case before.  Trying to navigate through that mess with a ten foot rod is quite the ordeal and extremely frustrating.  Finally made it to the water, California flows were at 312 and we were told Nevada was slightly higher and off color, so wading was doable but slightly quick but some spots were not going to be easily navigated through. 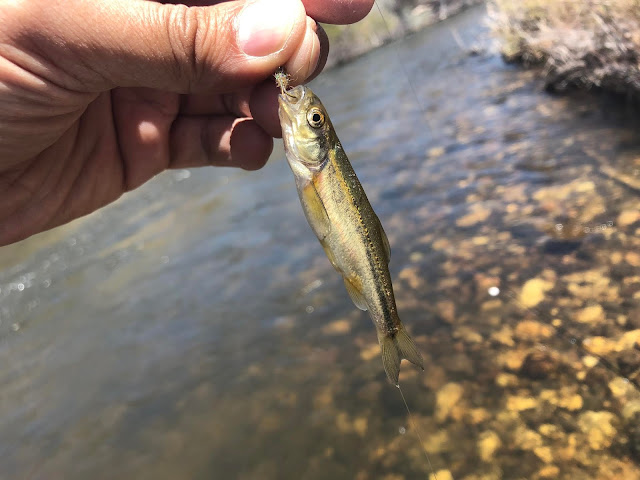 I fished a very productive looking run only to break off my entire nymph rig on some submerged structure.  After rerigging I moved up and maned my first fish on my Sage X 4100-4.  It was a Owens Valley Speckled Dace.  Definitely proof that spending big bucks on fancy rods has its merits.  All joking aside, I guess I can add it to the species list.  Fishing here was disappointing especially the difficulty accessing the good parts of the water so we drove further downstream to explore.  It looked much the same and while speaking with a local, he told us that access to the water is so hard now that NV no longer allows cattle grazing in this area.  They used to create the pathways into the water. 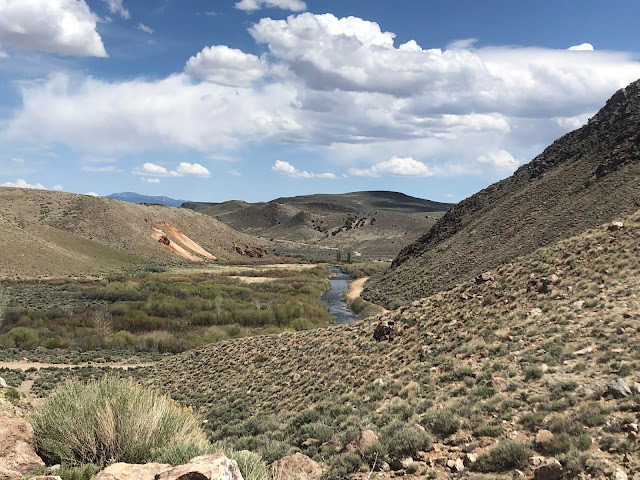 After sampling some of the water, I decided enough of this and head back to the CA side where I know where the fish are hiding. 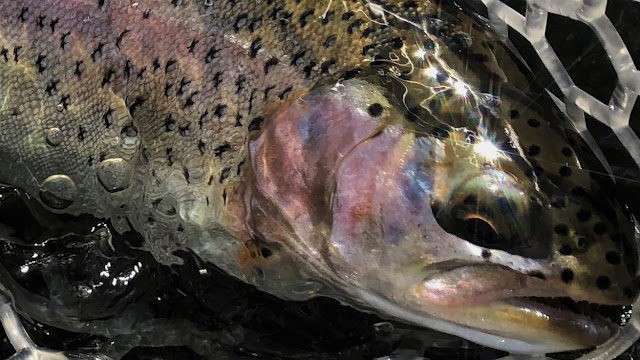 We fished a few holes without success before I decided enough of this skunk nonsense and head out to my favorite hole.  When I got there I saw an angler standing in it Czech nymphing the other side of the bank.  Cursing him under my breath I looked for another hole before coming back.  When I came back 20 minutes late he had moved upstream.  I began fishing my hole hoping it had reset.  It was not long before the angler was on a fish.  A good one that ran him downstream toward me.  He was having a hard time self landing it and I asked him if he need an assist.  He declined but after a few failed attempts he said yes.  So I got out of my fishing position and moved toward him.  His fishing partner was now with him and I noticed it was his son and after landing the fish I asked if he wanted me to take a photo of the two together with the fish.  After the photo I returned to my hole now with good karma.  It was no time before I hooked up on a fish that jumped three times before spitting the hook.  It was bigger than the 18 incher the angler just landed.  On the next cast I hooked up another before my knot broke.  Eventually I did land my fish the smallest of the group but at least the skunk was off.  Fished the hole for some more before leaving and heading back to the trunk to meet up with KB.
Posted by gourmetsportsman at 9:23 PM