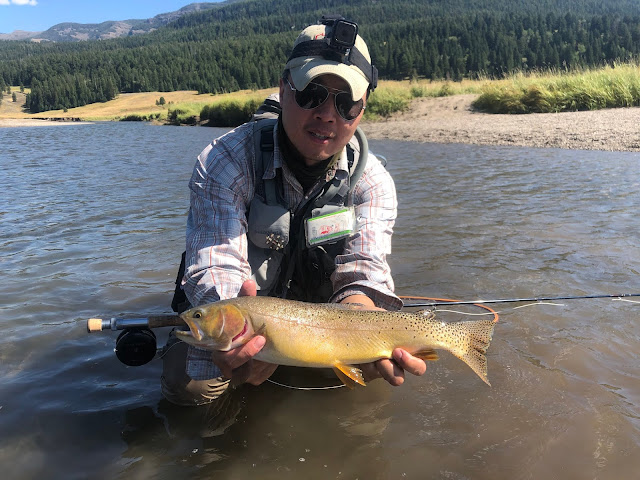 After a few hours in the morning fishing the Snake River we ventured northbound to Yellowstone National Park.  After securing an available campsite at Bridge Bay, the highest priority given the scarcity of available sites, we heading to Yellowstone River to try our luck for the last few hours of light.  No fish were taking for us but a couple of Montana boys were slaying them on nymphs. Unfortunately I left my nymph box in the truck and fish were refusing to take dries.  It didn't matter anyhow as I didn't have the required nontox weights to get my flies down anyhow.  I forgot to buy some at the fly shop.   So just before sundown we headed back to camp and made us some dinner. 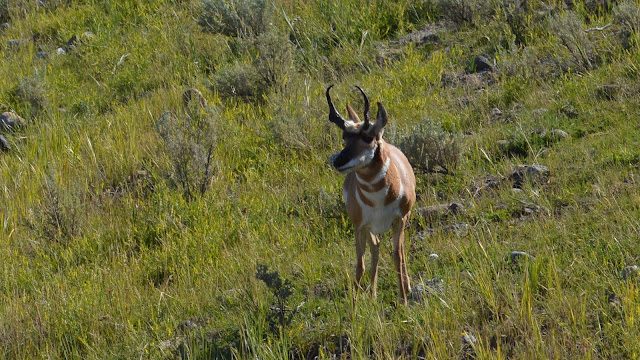 It took us a while to break camp and retrieve our items from the bear box.  Probably longer than it should have taken but after a quick breakfast he were off on the road.  This was my buddy's primary reason for this trip, catching a Yellowstone cutthroat. 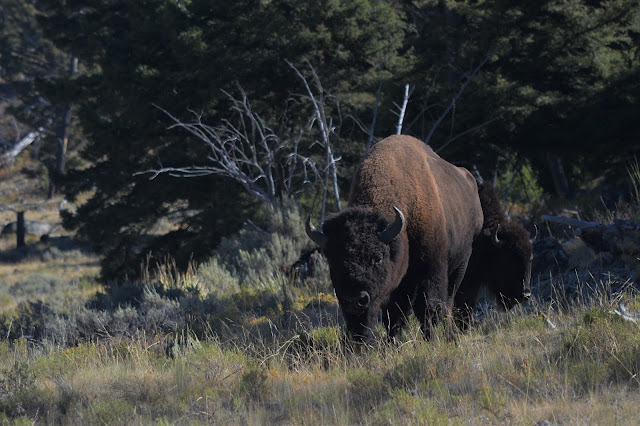 We still had quite a drive to make it Lamar Valley.  Along the way we be treated to great landscape and wildlife views.  It wasn't until around 11:30am before we actually made it on the trail of Slough Creek. 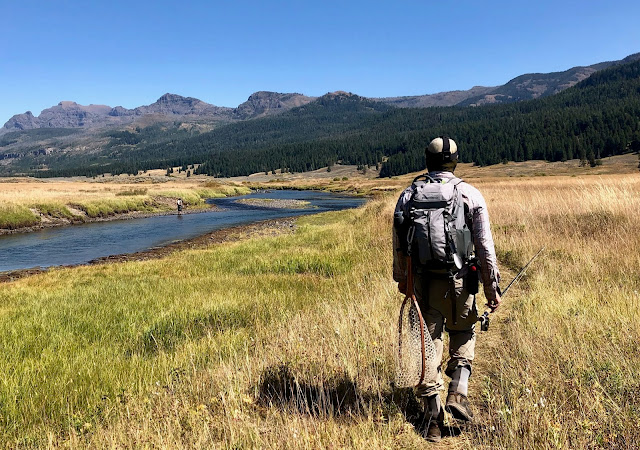 We'd have a six mile hike ahead of us to reach our fishing destination.  The hike was moderate in difficultly with the start being the hardest as it was an uphill climb.  It took us about two hours to get reach our entry point.  On the hike in we'd run into several fly anglers on their way out.  After brief discussions the report was the fishing was epic, fueling our march on wards. 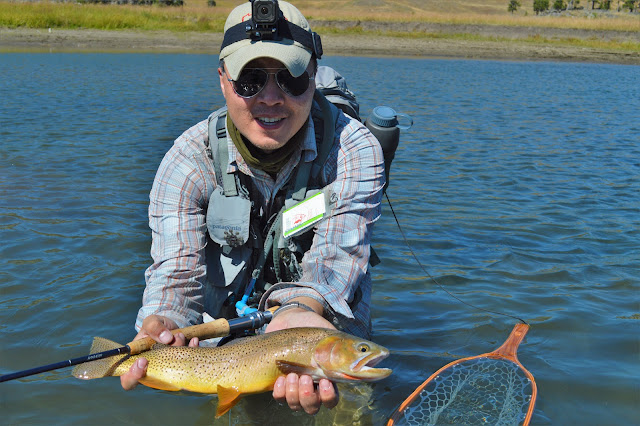 After checking the GPS, we finally found our entry point and made our way in.  At the campsite there was a large tent that housed a group of at least six or more.  We made our way upstream looking for good water further from the tent as the water near it was likely already fished over.  I found a nice looking hole and got not reaction my newly created hopper. 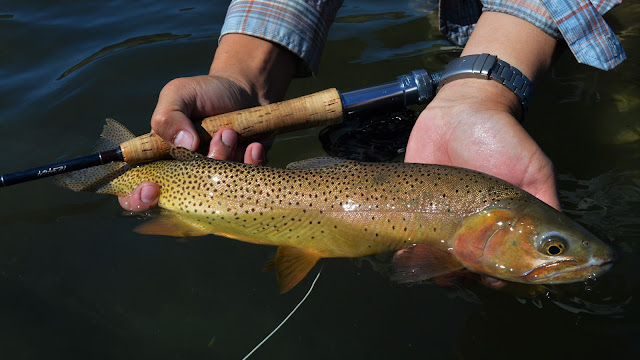 I moved up toward the seam feeding the hole and within about tens minutes of searching I was on my first fish of the day.  Initially it hardly gave a fight.  A couple bulldogs and then it sprang to life and started to give me a few nice little runs once I got it close to me.  The moment I hooked up I immediately called over my fishing buddy but he took his sweet ass time.   I manged to net the fish and almost a soon as I took a pic it sprung back to life and launched out of my hands.  With the fly still in its mouth I managed it back by this time my buddy was there to get me few pics. 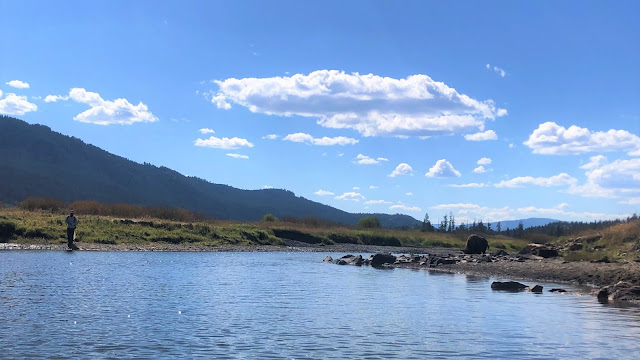 With the skunk off the day, I gave the run to my buddy in attempt to get him his first.  While we saw a few in there none wanted to take again.  So we move upstream.   While moving up I saw looking for a spot to fish and Chul shouted to me from across the bank and told me to look behind me.  200 yards away was a buffalo on my side of the river making his way to the water in search of something to eat.  So I slowly hightailed it away from him to give him enough space to do his own thing. 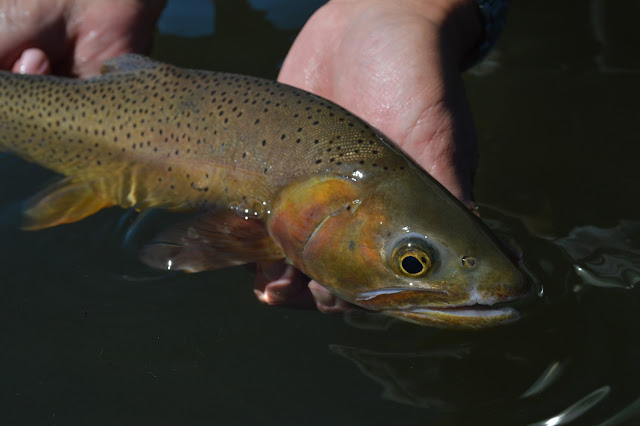 My intention was to give Chul the first run at the water upstream of us but since the buff was too close for comfort I moved further up river and started fishing.  Along a four foot bank I managed my next fish that took as my hopper sank below the water film. 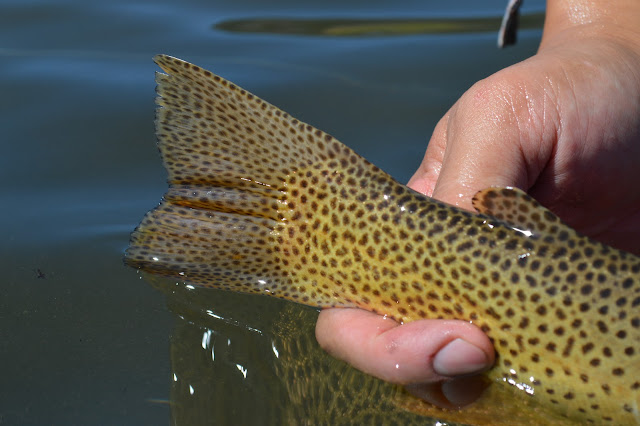 This one was nicer than the previous but not by much.  Now with my second fish to hand I made it a point to give my fishing partner first crack at any upcoming water.  I'd fish below him and get all the sloppy seconds.  It took want seemed like an eternity (at least an hour or more) for him to hook his first fish.  Now relieved he finally got a fish I could finally start "really" fishing again.  As soon as I turned my back though I hear some grumbling and turn back only to see a limp rod in his hand.  "You fucking lost it?!"  I screamed.  While in my head I thought  I'm never going get to fish anymore choice water.  After another hour of sloppy seconds and with his frustration climbing I asked him what water he wanted to fish and I'd fish above him and take the next hole.  So while hiking up the stream I ran into two fly anglers and chatted them up.  They told me that the next bend is the best in the river with a dozen fish every few feet.  Now I had a dilemma.  Do I take it or go back get my buddy and let him have it?  The devil on my right shoulder told me take it. Afterall you haven't gotten a fish in hours and he's blowing all his opportunities.  The asshole angel on my left told me to go back and let him have it. 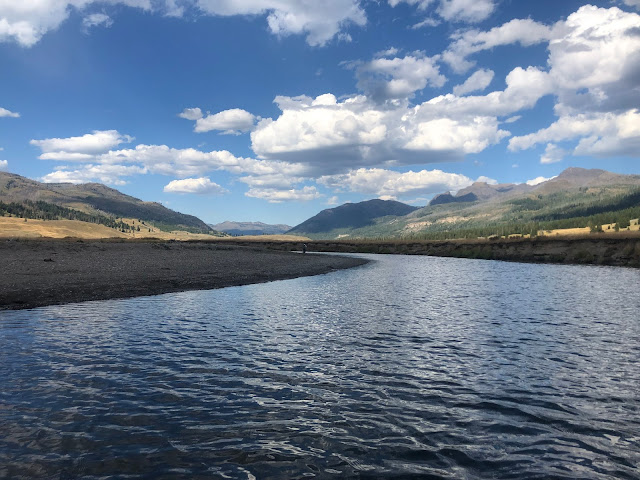 Should have listened to the guy dressed in red.  I went back told him to forget the water he was fishing and head to the next big bend and fish it informing him what the anglers told me.  As he started to make his way there I started to fish his hole and in a few moments I was on only to come loose after a brief fight.  Chul started his way back to me and said he'd just finish fishing this whole.  I yelled back "FUCK NO!  Go fish that premium water!" 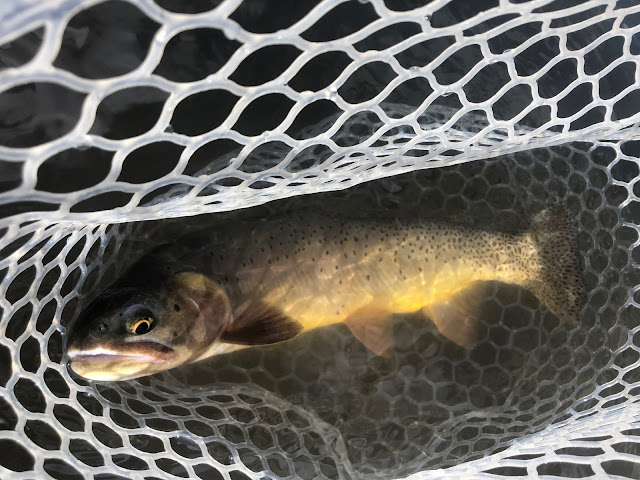 He managed a fish or two to rise but couldn't get any fish to stick and with blood pressure spiking at dangerous levels I told him to take a break and have a snack and relax.  Take ten minutes and get focused.  We did and after calming himself he began fishing again.  I'd move down thirty yards and start fishing behind him. 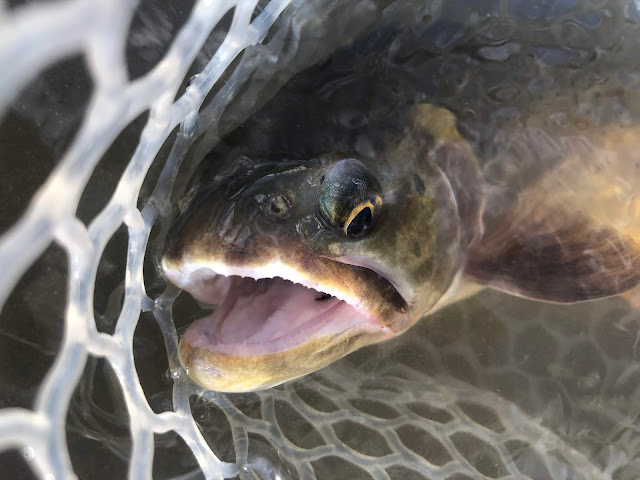 I managed to get a couple fish to rise but my luck was gone now and couldn't get any to hooked on.  It took him all the way to the end of this long bend to finally get his first Yellowstone cutthroat.  As we were trying to get him his "hero" shot he fumbled the fish and lost it.  LOL.  What an asshole.  All this effort and no glory pic.  All I could do was laugh at him like any good fishing partner would have done. 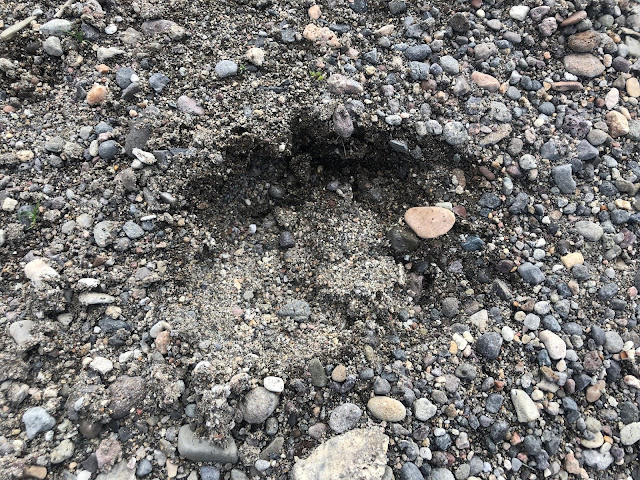 I moved upstream and fished some water until I broke off and was too lazy to rerig.  It was getting late and we still had over six miles to make it back to the truck.  We did not want to be hiking out in the dark in grizzly country.  I went back to Chul and we disassembled our rods to ensure we didn't waste any more daylight on fishing despite the fact the fish were now actively feeding on the surface.  If only we fished another hour...But that wouldn't have been wise. 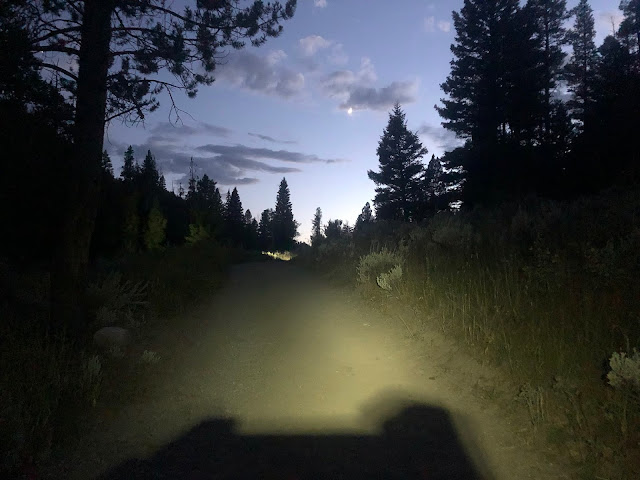 After hydrating as much as we could we started our hike out.  On the way back we passed through the campsite and a buffalo was roaming around awfully close to their tent.  As much as I was thinking how great it would have been to have a backcountry permit to camp out there so we could have fished more in the back of my mind I was glad we didn't. It's an uncomfortable feeling camping out in the remote sticks with animals that could do some real damage.  Also being only armed with bear spray is not comforting either.   The bear track I found on the riverbank was only a far too vivid reminder of that fact.  As we made our way back we'd encounter a bison path-hogging moving toward us on the trail.  We gave him the right-of-way and we quickly moved off trail and made a roundabout way through the tall grass meadow to bypass him.   For the last 45 minutes of the hike we'd be doing it in the dark.  It's a pretty uneasy feeling I must say. 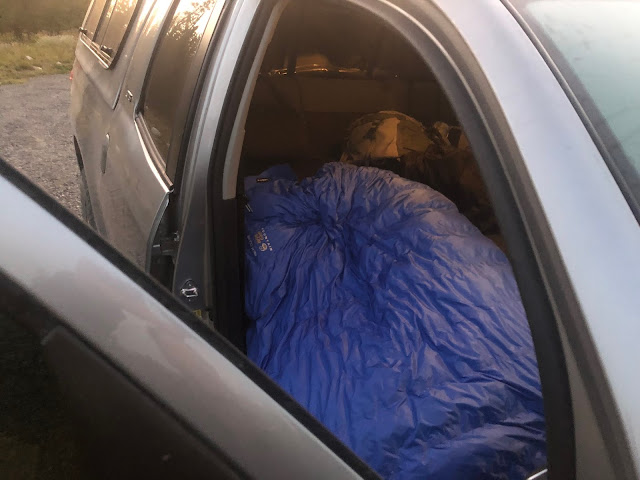 In the pitch darkness we'd make it to the truck eventually but that wasn't the end of our problems.  We had no place to camp and all the sites in the park were full.  We'd have to drive out of the Yellowstone to find a place. This would be add an additional hour to our night.  Eventually after exiting via the Northeast entrance we made our way past Cooke City to finally find a campsite.  Passing several that were filled to capacity.  Eventually we found one.  The last spot in this particular site too.  I'd have to sleep in the cabin of the truck as no soft sided camping was allowed in bear country.  Chul had converted the bed of his Tundra into a sleeping area for the trip so he was fine.  I slept in the passenger seat reclining it as much as I could.  Fortunately the cab of the Tundra is quite spacious so it was equivalent to sleeping in a business class airline seat.   It would do for the night. 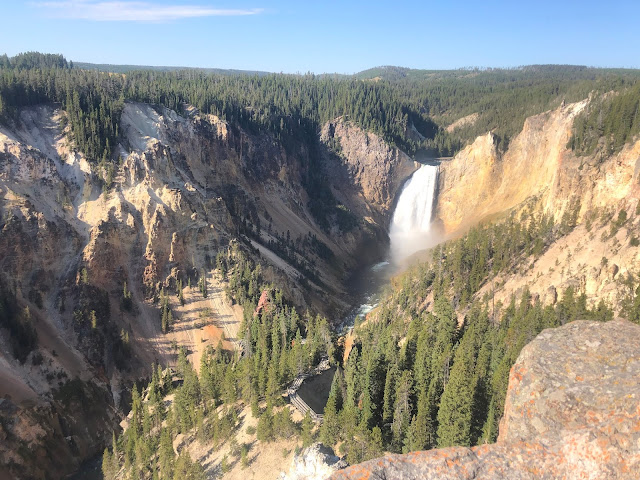 I was given the keys to the truck and exhausted I forwent dinner and went to bed after placing all the required scented articles into the bear box.  The campsite wasn't large perhaps 15-20 spots max and I was the asshole who inadvertently woke everyone up TWICE in the middle of the night by tripping the car alarm.  I'm sure I was the most loved person in that night.  We woke early and left immediately after retrieving our items in the bear box.  I didn't want anyone mad-dogging me for waking them up.  Twice. In the middle of the night.   What an asshole. 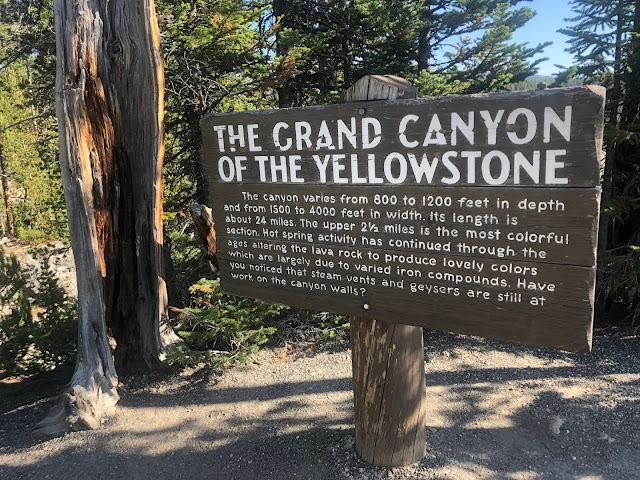 In town we had breakfast before heading back into the Park for some sightseeing on our way to Montana.  We'd fish the Firehole along the way but with only dinks on dries it isn't much to keep us to stay any longer.  Fish were plentiful but hardly worth our time.  After a little over an hour we decided to head out toward the Lower Madison.

Next: Montana Lower Madison.
Posted by gourmetsportsman at 11:21 AM