Forget The Trout, Let's Talk About the Food

Fished yet another piece of water that I have long known about but have neglected to fish.  Chul and Tuck have fished this stretch of water previously and have slayed trout, some of rather respectable size (for Southern California).  Tuck brought his roommate Tyson to join our adventure.  We met up about 1.  Chul was the first to arrive, he unloaded his truck and began packing his gear into the Rover.  He had brought beers in a small lightweight insulated box.  Looking at his ice cooler, I told him to get that shit out of here and showed him the Engel.  Having only known him for a short time, I'm not at a point where I feel comfortable insulting Chul without him taking offense, so I let the choice of beers, Coors Light, slide.  In years past on the other hand, Joel, one of my oldest fishing buddies, did not get the same respect.  He quickly learned after much chastisement, if your going to bring beer, only premium beer allowed in the Engel.  Tuck and Tyson were not long after Chul to arrive, they packed up and we headed out.

We reached the water after 2pm or so and started to hike downstream to a section Chul thought would have bigger fish.   The trail was pulling us away from the river so we climbed down a section to get near the river.  Once near the water we could see snouts rising, sipping on the surface.  And we split out a bit to check out other pieces of water.  Chul and I moved further downstream while Tuck and Tyson rigged up.  I hit the first pool and on the first cast I had a rise on my dry.  As I raised the rod, I missed it as I had too much slack on my leader.  This would be an ongoing theme of the day. 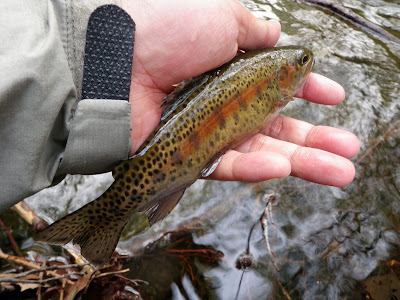 Eventually I was able to start landing some trout.  The first fish, I set the hook so hard I lifted the dink out of the water and flung him about 6 yards behind me.  At least for me, no fish were big but what they lacked in size the fish made up for on beauty.  Coloration on these trout never ceases to amaze me, I love the blue parr marks blended in with the red stripe.  Many of the trout seemed to be very dark, almost a grey similar to that of the fish from the West Fork of The San Gabriel.  I don't know why that is, I can only imagine it has to do with the overhead canopied trees has something to do with it.

I managed to eat it again, slipping this time trying to climb over some rocks on the water.  Falling on my fly rod side, I was lucky to have fallen in the deep water.  Had I fallen on terra firma I would most likely have broken my rod.  I was drenched from chest to toe.  I did notice that my Simms vest has no drain holes for such an event.  As a result my vest was double the size now.  I quickly squeezed all the liquid out and tried to dry off.  This is the second time I have fallen trout fishing.  It may be a sign.
Since we would be driving back toward Arcadia, I suggested we have dinner at Din Tai Fung, for some Xiaolongbao or steamed pork dumplings.  In 1993 the New York Times ranked it as one of the top 10 restaurants in the world.  I let the boys know before we left that since we'll be in the neighborhood, we are going there after we fished.  It's been years since I 've been, either in the original Taipei location or to this particular location.  But when I found out that Chul was going to have us fish near it, we were going no matter if they wanted to or not.  They were in for a treat. 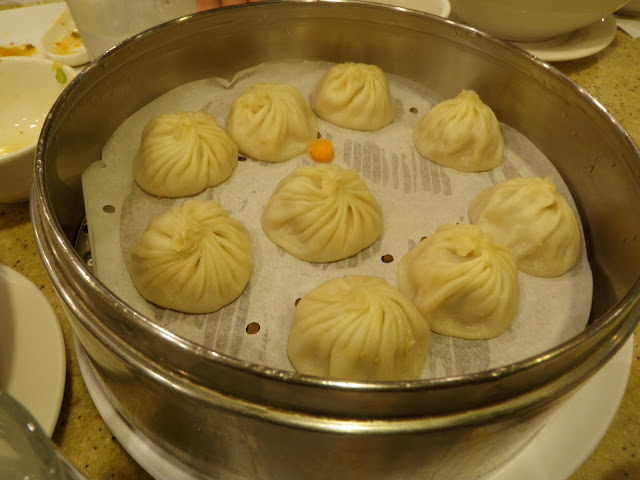 We waited about 15 minutes before minutes before being seated. I asked if its okay if I ordered for everyone. They have no problem with that.  I ordered Hot and Sour soup, 2 orders of crab and pork dumplings, 4 orders of the original and famous pork dumplings, pork and vegetable wonton with spicy sauce from the recommendation from our waitress, and shrimp fried rice. 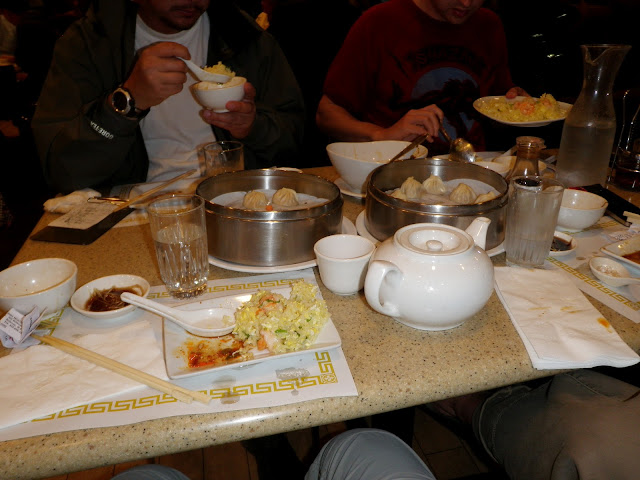 After teaching the boys the proper procedure to eating one of these dumplings so they don't get third degree burns in their mouth, we dug in and finished the day with a nice meal.
Posted by gourmetsportsman at 11:08 PM