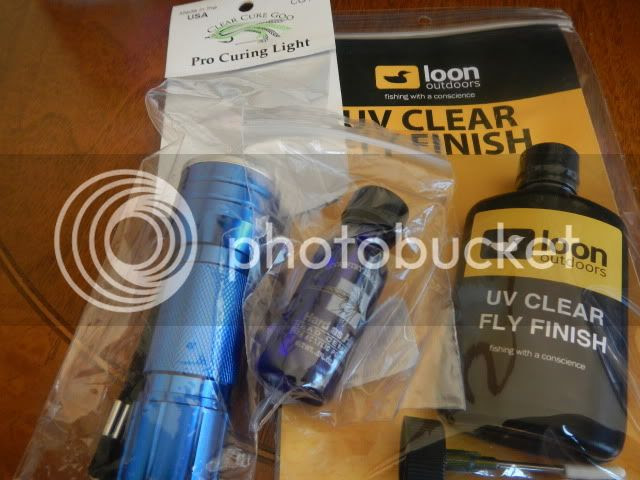 Admittedly I am slow to adopt new things.  I hunt in wax cotton.  I shoot a side by side. I still buy CDs and don't even own digital music.  I was late to buy a cell phone that has internet or email capabilities and only did so cause I dropped my cell in the pool.  Even though I don't instantly embrace new things I was interested when I learned about UV fly tying materials. After a decade or so of working with lead, softex, epoxy in non ventilated rooms, I'm probably going to have kids (if I ever have kids) that will have a third nut or sixth toe or something.  I heard that this UV stuff is nontox so I decide to look into it.  I spent the afternoon at Bob Marriotts and decide to buy some of this stuff.  I bought the Clear Cure Goo UV light and the Loon UV Clear Fly Finish.  Since this stuff dries tacky, Hightower said I should finish the fly with some Hard As Hull. 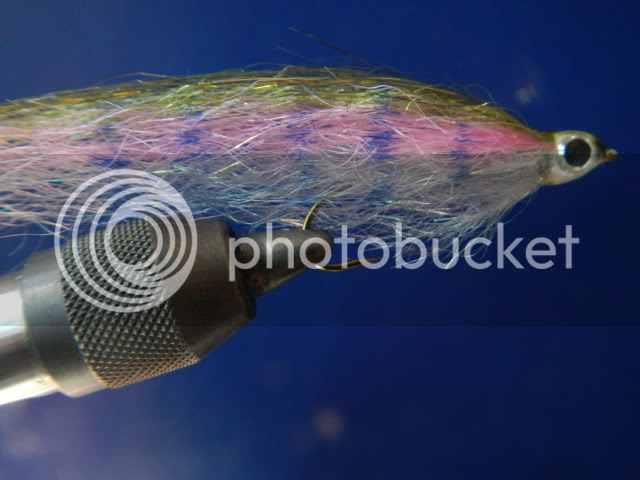 When I came home I was anxious to try this stuff.  I'll be fishing tomorrow in an area where Tuck and Chul saw a 16 inch brown attack a 6 inch rainbow.  He held it in its mouth like a dog holds a bone.  Tuck actually has a picture of it and I am waiting to see it.  I decided to tie some rainbow steamers.  This stuff is AWESOME!  I love it.  I hate working with epoxy.  I hate mixing it.  I hate how it yellows over time.  I hate having to rotate the flies.  I hate it all.  So I haven't tied with it in years.  This UV stuff is so simple and convenient and quick.  I love it. I tied a few rainbow streamers.  I experimented on one with a Fish Skull Articulated Shank and another with a bend back TMC 411S hook which are the two flies on the bottom of the picture to the left.  I plan on trying them tomorrow in the undercuts of the larger pools.  It should be interesting to cast them on my dinky NAC 4'9" 3 weight but I don't care.  It should also be interesting to see how the weekends storm affected the water.  I intend on tying some of these in Golden Trout colors so when I hit the Sierras I can target those big browns that are eating the Goldens.
Posted by gourmetsportsman at 6:33 PM