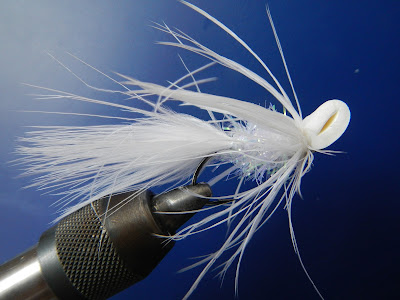 Webb's Foamhead Popper is the first fly I tie on when I decide I want to fish for bass on topwater.  This fly was created by Capt. Bryan Webb and proven in the jungles of Costa Rica.  For whatever reason, Bryan was, and I believe still is, not to big a fan of this fly.  I'm not quite sure why that is, I once asked him to name the fly and he refused.  He said it's just a Gurgler variant and wasn't worthy.  For which I responded every fly is a variant of some existing fly so just name the damn thing because it's awesome.  He never named it.  So I named it.  For the time being, or until Bryan actually names it, it will be referred to as Webb's Foamhead Popper.

Prior to this fly, I was (and still am) a big fan of the Gurgler.   In fact it was the first fly I'd tie when I wanted to fish topwater.  When Bryan and I were tying one evening for an upcoming trip to Costa Rica, Bryan came up with this fly.  He was originally tying some Gurglers and like in many tying sessions started to play around with some variations.  He came up with the fly in the photo above.  He tied two of them and tossed them at me and said try that in the jungles.  I looked at it and instantly knew and said "that'll catch some fish."  When we finally made it to Costa Rica months later, I had all but forgotten about the fly and fished the jungles with the staples- a red hard foam popper and then a gurgler.  Eventually I lost the Gurgler and went into my fly box and found Webb's fly.  So I tied it on.  I soon learned that this fly and all its merits.  After several fish ranging from snook, machaca, mojorra among others, I lost the fly and then lost the last one on ahuge machaca.  In a dash, Emerson, who I was fishing with that day, and I started tearing the backs of our Gurglers to try and mimic Webb's fly but it was not the same.

What makes this fly so special is that it has more than one action when fished.   The longer you fish it, the wetter it becomes and changes the dynamic of the fly. When you first begin to fish it, the popper acts as any ordinary popper will.  It pops water and stays parallel to the water.  As time goes by, the marabou and schlappen begins to collect water and then forces the tail end down.  Thereby creating a hinge like action where the head remains above the surface and the body and tail sink down so the fly is actually perpendicular to the water.  Lastly when fished long enough the foam becomes water logged and sinks the entire fly, not too deep maybe just a few inches below the surface.  When this occurs the fly becomes parallel again but the action turns much like a Rapala would for gear fisherman wiggling through the water.  If the two last actions are not desired than you can squeeze out the water in the materials and fish it like a traditional popper again.  I have caught fish on all three actions.  This is the fly's brilliance.﻿  Also it is extremely easy to tie.  Furthermore, if and when the foam head breaks apart, you can rip the entire head off and fish the fly with a sinking line as a streamer.  Now that is what I call versatile. 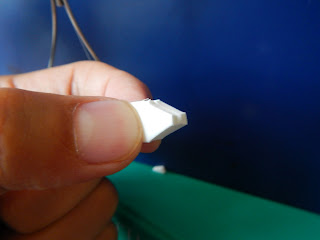 First cut a strip of foam.  The longer or wider the head the more water it will push.  Fold the strip.  Hold together and cut the edges of open side. 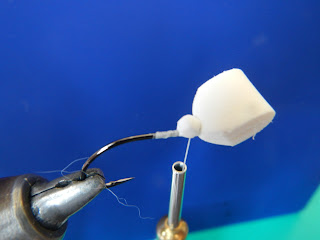 Wrap the stinger hook with abase warp and wrap forward toward the eye.  Place the foam head in front of the eye and tie down.  Tie the entire edge of the cut side of the foam.  Once finished wrap the thread rearward. 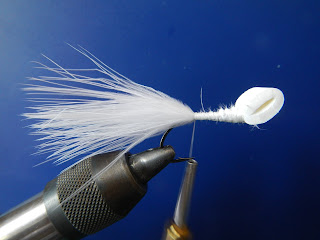 Tie the marabou tail down. 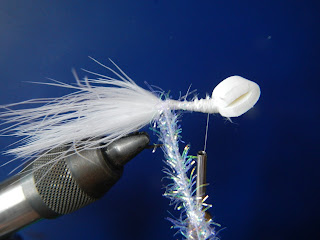 Tie the estaz and wrap it forward. 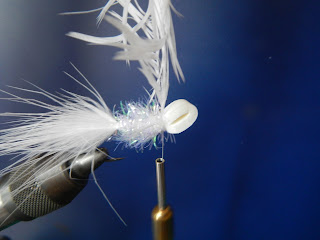 Tie the schlappen and wrap around 3 or 4 times depending on how much you collar you like.  I prefer a more bulk for added motion.   Pull the foam head back and whip finish in front of the head behind the eye of the hook and cement. 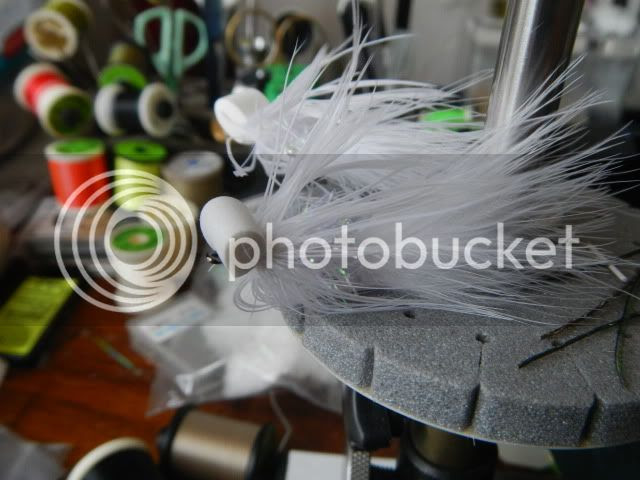 This fly can be tied in many colors.  I prefer all white to represent shad but I have tied the with chartreuse, red, black yellow and combinations of various colors.  If you intend on using this fly at Barrett Lake or an any other water that requires barbless hooks, I suggest that you dremel the barb off as pinching these hooks generally results in it just breaking the barb and will not pass the cottonball test.
Posted by gourmetsportsman at 3:24 PM