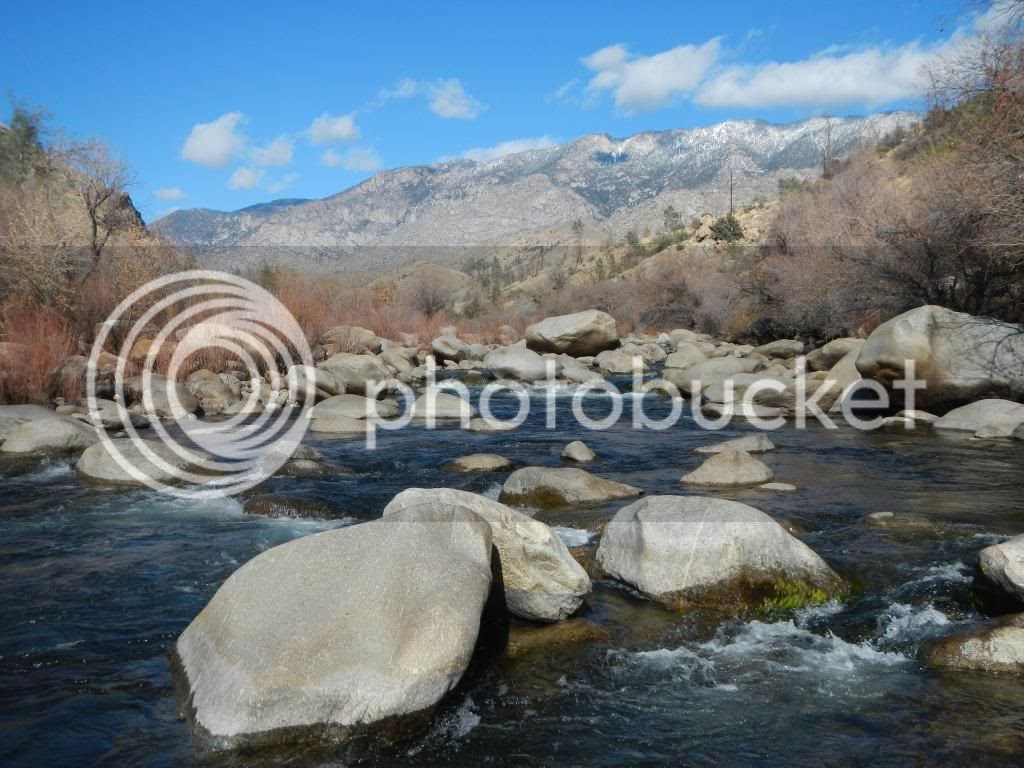 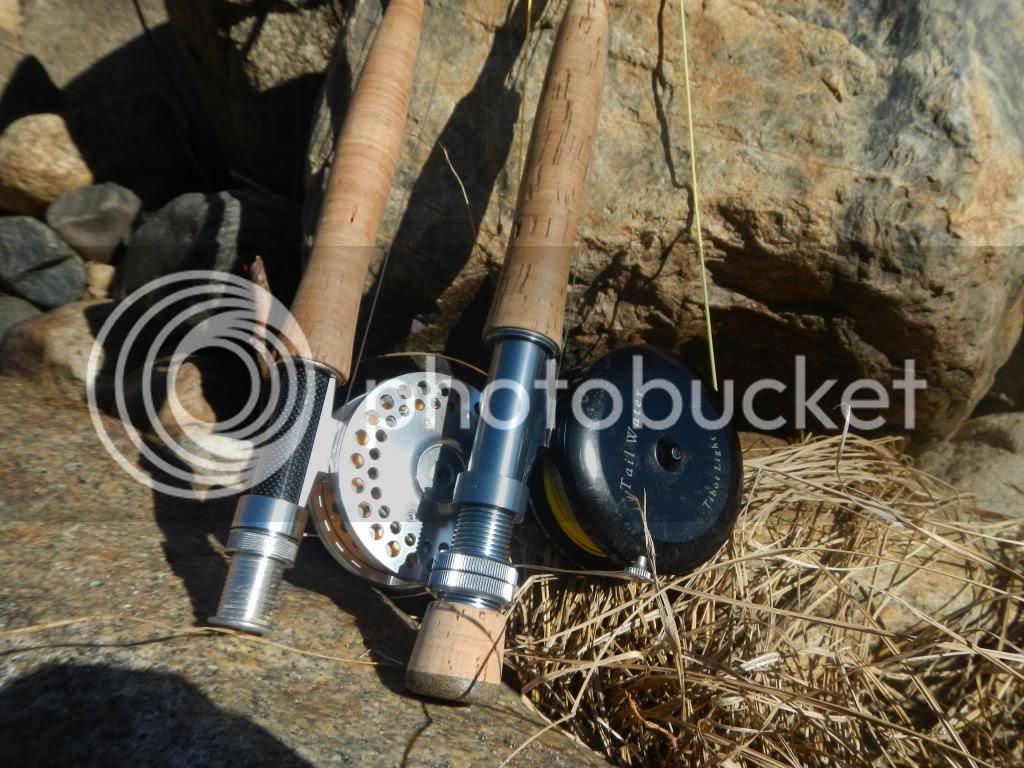 The original plan was to attend the Fly Fishing Film Festival on Saturday but after some consideration the gang thought it better to fish rather than watch others fish.  With some rain in the forecast, we debated all week whether to cancel the trip or to go forward.  Checking weather patterns throughout the week the unanimous consensus was to get our lines wet.

Saturday morning I met up with Erica and Chul at his house at 6:30 and we managed to get out around 7am.  Tuck had spend the night at Joseph's as he lived north of all of us, they would head out later and we would eventually met up on the road or in Kernville. 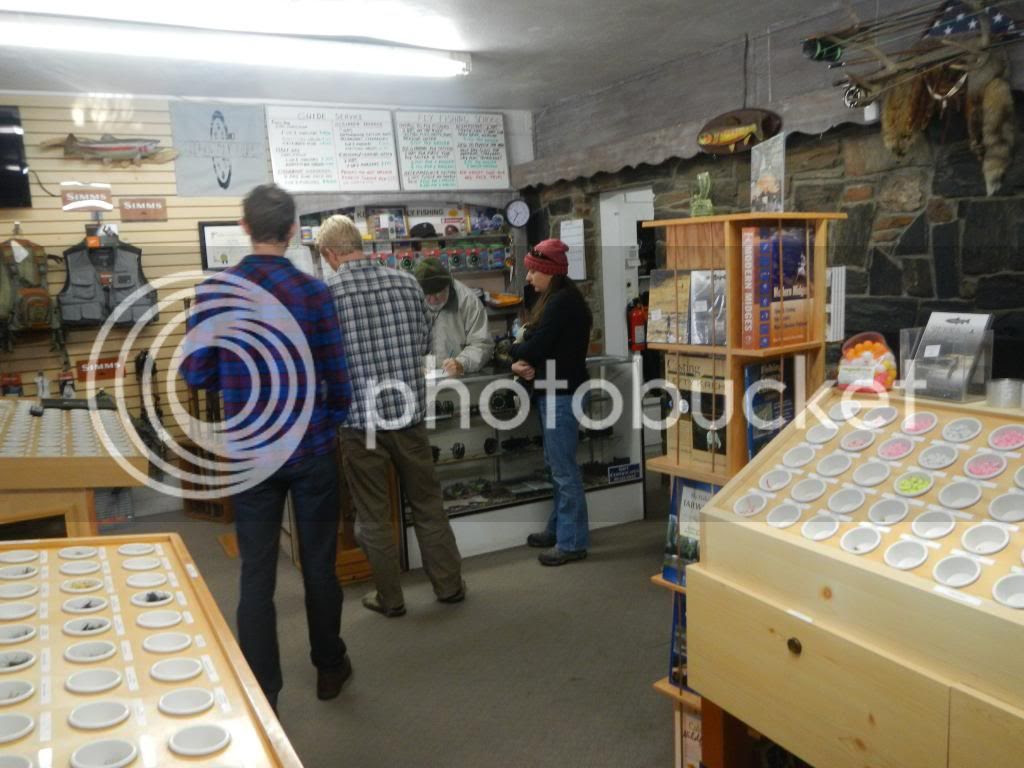 We caught up with the boys in the canyon and we headed to the fly shop as Tuck and Joseph wanted to pick up flies and since Erica forgot her wading boots so she needed to rent a pair.  After getting the "inside scoop" we headed to an area suggested to us at the shop.  After arriving we looked the water over and decided to pass on it as it was too windy and deep to get a good drift.  We headed back into town to fish an area hoping to intercept large fish making their way out of the lake and into the river system.  This proved a waste of time.

We drove up into the 20 mile section and pulled over on a promising stretch of water.  On my first cast I hooked up with my first Kern River Rainbow.  My first fish of 2013, a dink, a baitfish sized dink, no bigger than the fish that are commonly caught in our local mountains.    If I wanted dinks I would have stayed and fished our local mountains.  Hopefully this first fish of the year is not an indication of the rest of my fishing season.  I wanted to win the bet, anyone who catches and verifies with photos a fish over 20 inches doesn't have to pay for dinner.  At least I was the first to catch a fish.  After more casts and I hooked up on another slightly larger dink.  Not impressive.  Even if the bet was on an aggregate total of all fish caught I'd still be buying dinner.  I continued on this seam as I couldn't really move since we had five anglers on the water.  At the end of my drift while on the swing I finally hooked up a legit fish.  I played him close enough to see his size and he flashed me his vibrant red stripe and then came lose.  Come on.  On this stretch Chul managed a nice 13 incher while the others didn't get any.
﻿
For the rest of the day we drove around looking for better water.  The BWO hatch was coming off and although I wasn't seeing any fish coming up I regretted not carrying a second rod rigged with a dry fly.  So on the next stop I rigged up my four weight with a Harrop's Hairwing.  As it was getting late we found a nice stretch of water that Chul was getting hit on just about every cast.  He pulled some serious fish and even managed one on a dry fly.  As I approached him he told me to fish that section but the fish had already shut down.  Up above him Tuck managed one and Joseph landed  several.  None of any significant size.  Erica was skunked.  Fishing was slow for whatever reason perhaps it was the recent rains, the cold nights, or just us fishing the wrong rigs.

We left the river and into town for a dinner.  Everyone would have to pay for this meal. The original plan was to camp but since Chul brought Erica along, they had got a room in town.  Tuck, Joseph and I planned on camping but during dinner we debated whether to get a room also.  After having giving Chul grief earlier for not camping we decided to get a room ourselves.  Lucky for us the motel had a place to play pool.  We spent the night bull shitting, playing pool while drinking.  As typical with trips like these, most of the memories are these parts as these times are spent laughing and ribbing each other.  We eventually were kicked out during closing time, which was a good thing because we would have spent all night there if we could.  Erica and Chul headed to bed as the rest of us headed to our room and before heading to bed debated which state was the best (of course California was not in the running).  Day 2 to follow...
Posted by gourmetsportsman at 6:44 PM