...To Those Who Wait 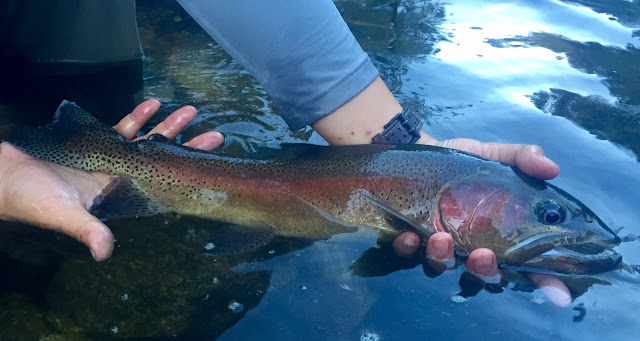 Last week it was cool and cloudy, ideal temperature for trout in our Sierra waters.  When I finally had some time to plan a backcountry trip, a heat wave comes in that almost put an end to that trip.  As days drew closer, we continued to monitor the weather in the hopes by some miracle the weather would turn but it did not look that way.  We considered all our other options and with drought conditions now for multiple years it looked like our options were nil.  We pressed ahead with our original plan. 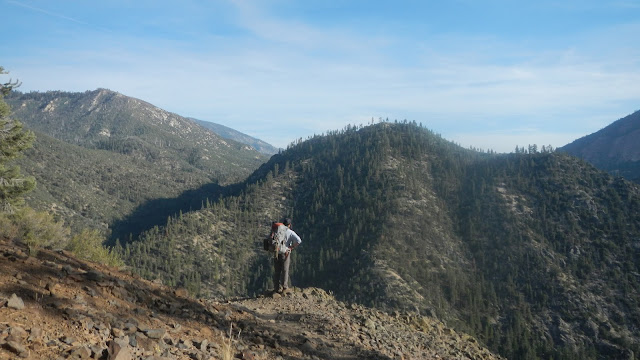 Friday late morning we headed out with our backpacks ready.  After a 5 plus hour drive we made it to the trailhead and started our 2.8 mile hike down the canyon.  We arrived at a suitable campground and dropped our packs, rigged our rods and headed upstream.  With only about an hour of light we fished a few holes.  I managed a pair of rainbows and Chul managed one himself none larger than 10 inches.  All caught on dry flies.  So we managed to get the skunk off the for the day. 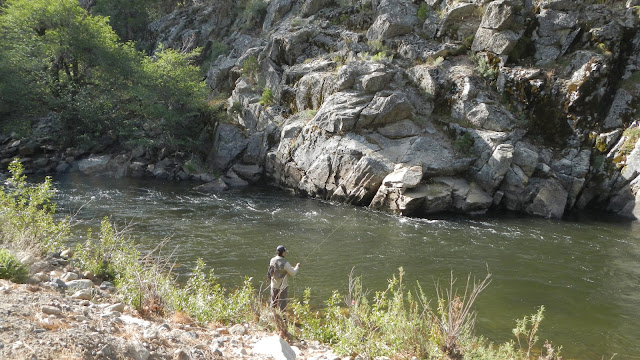 The next morning we finished our breakfast and headed upstream.  We started with dry.  Chul would add a dropper and began catching fish.  I followed suit afterwards.  At one section Chul spotted a hog but spooked when he tried to get his nymph in front of it.  After marking it on his GPS we moved on to come back for Hog Johnson. 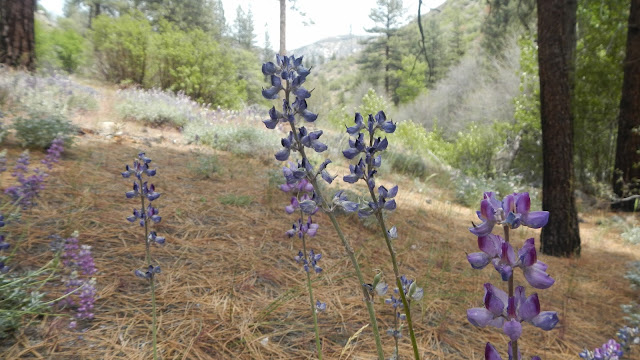 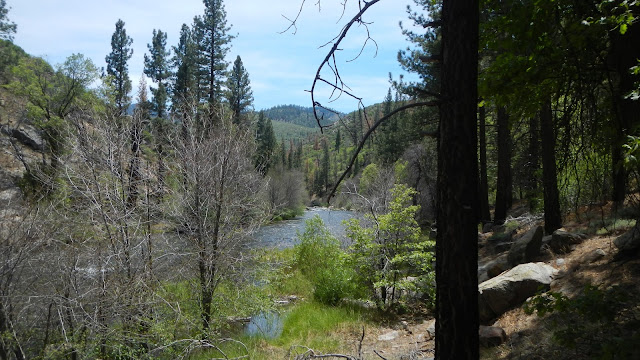 With the heat beating down on us we continued to hike and fish.  It seemed every time I turned my head down the river Chul had a fish on.  I continued to struggle to manage any fish so I switched to a nymph rig figuring in this heat the fish would be down.  I managed a dink on my trailer fly and it came off.  At this point I had a few fish strike my flies but only to have them come off after a head shake.   Frustration grew as the day went on, after at least a half a dozen lost fish I was at my wits' end. We decided with this heat we would make it back to fish a few hole we bypassed earlier while heading upstream. 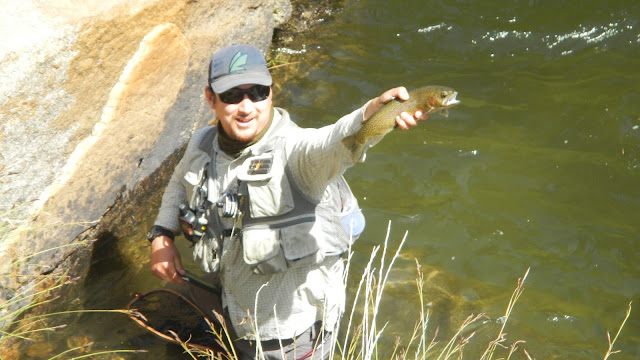 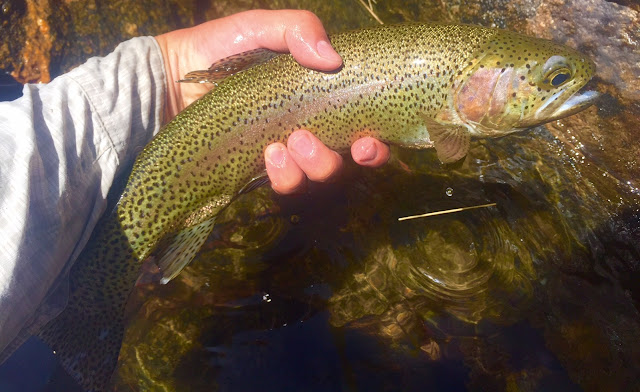 At on spot over a shallow cliff Chul spotted two nice fish feeding on emergers.  He gave me the hole knowing I was at critical anger levels.  My first cast, the wind picked up and blew my size 18 dry straight into a branch.  Stuck and not able to free the fly Chul took over and managed to land a beautiful 14.5 incher. 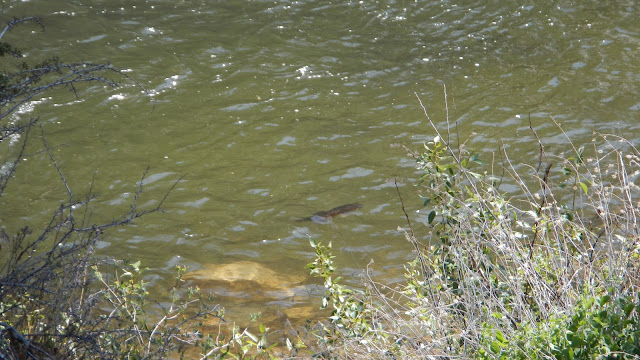 As we made it back to basecamp, we overlooked the hole where Chul saw Hog Johnson.  There he was again facing downstream as this section of the river was creating a reverse current.  Chul stood above while I made my way down.  Tired and mentally exhausted I stumbled down the rocky side and created just enough vibrations to spook the fish.  Frustrated I climbed out and headed to camp.  We would return later and try again. 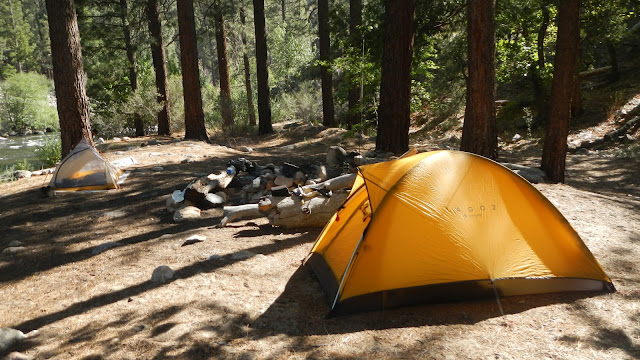 We rested our aching bodies while trying to keep cool in the shade in anticipation for the evening hatch.  At about 5:30pm we made our way back.  Our first destination was for Hog Johnson.  He was there again facing in the same direction.  I managed a few casts to him but he spooked again.  He left heading upstream to come back for him again later. 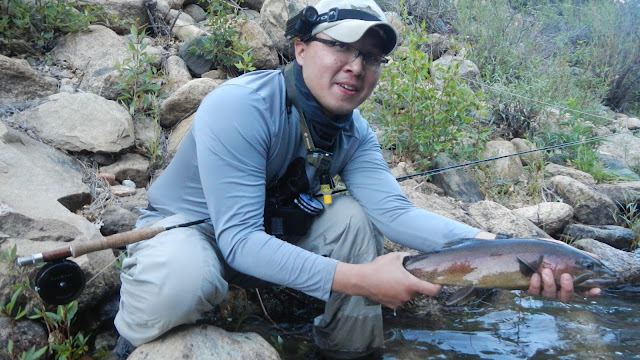 On the same section of river that Chul managed a few fish earlier I tried the same technique but was unable to hook up.  I looked downstream and Chul was on fish again.  What was he doing different than me?  I went down there and took his hole after he had some troubles releasing a fish.  I had multiple rises on my dry but could not stick any of them.  I was seriously in danger of the skunk.  We headed back for one last attempt at the Hog.  Chul spotted me from above as I made my casts at his direction. At this point canyon grew darker and I could now no longer see my dry fly so I had to rely on Chul to guide me. Drift after drift without a reaction my chances of getting the skunk became more and more a reality.  Finally Chul told me to put my fly just right of the faster current and hold there.  So I did and moments later Chul yelled "STRIKE."  I did as commanded and he was on.  The beast took and gave a half-ass fight.  Chul netted him and by the looks of it, he commented that with it's vibrant colors and less than enthusiastic fight he must be in post spawn mode.   Looking at him again, even with a thick body, it appears with his huge head and tail his body was somewhat disproportionate leading us to believe that theory to be correct.   The day long frustration turned to relief and jubilation so we ended the fishing on that high note and headed back to camp for chow and must needed sleep. 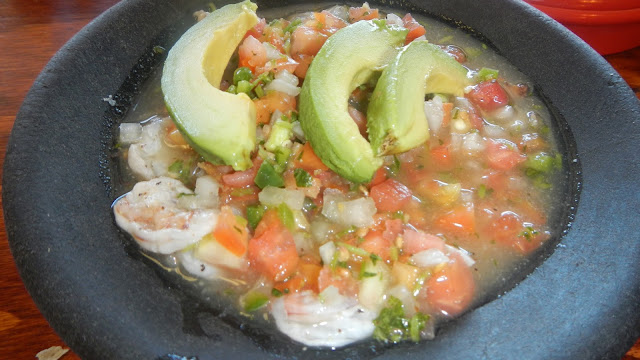 At camp we decided against fishing in the morning and head straight out of the canyon first thing on to beat the heat.  We rose at 5am began packing our gear.  It took about 1.5 hours to hike the 1200 feet of elevation.  We headed toward town for brunch.  Tired of heavy backpacking food I chose to have shrimp cerviche before heading back home.  The ride home was the usual banter of toilet comedy which is always entertaining and keeps the trip fun.
Posted by gourmetsportsman at 6:39 PM 1 comment:

The Timeless Masterpiece: The NATO Jerry Can 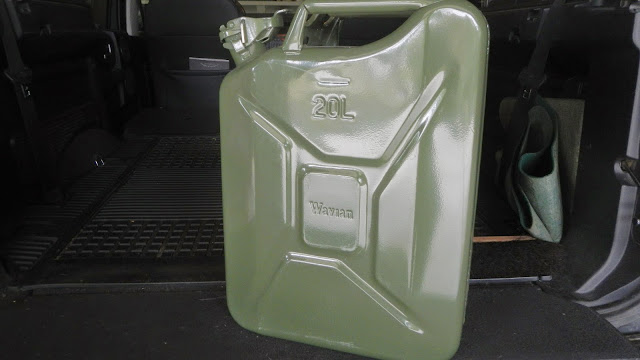 Proper NATO Jerry cans are back, available to all 50 states including the People's Republic of California.  For some time these cans were illegal for all states because of the federal adoption of CARB requirements.  As a result an inferior version of the "Jerry can" were sold.  Thanks to Wavian and their introduction of a CARB compliant spout, the traditional Jerry can is now available.  This does mean each cans bought from now on must include a spout whether or not you already own one and thus increases the price per can $20-$30.  I suppose it's a small price to pay for proper fuel storage.  In days past surplus NATO cans could be had for as low a few bucks; those days are long over. 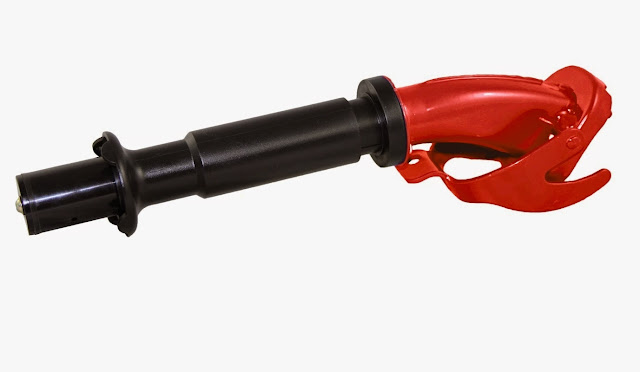 Not long ago I wrote about the Opinel knife and how it was named by New York Museum of Modern Art as a design masterpiece.  I don't know what criteria MOMA used to judge what constitutes "design masterpiece" but they left out the German Jerry can. It truly made no compromised to either form or function. 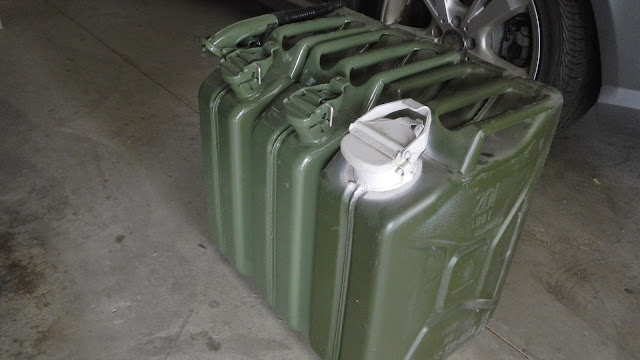 Fuel storage containers in some form have been around long before the Jerry can but it was the Germans, specifically an engineer named Vinzenz Grunvogel, who perfected it.  Developed for Blitzkrieg warfare, the Jerry can is truly an ingenious design.  The Jerry can has now become useful for hunters, explorers, offroaders, preppers, and collectors. 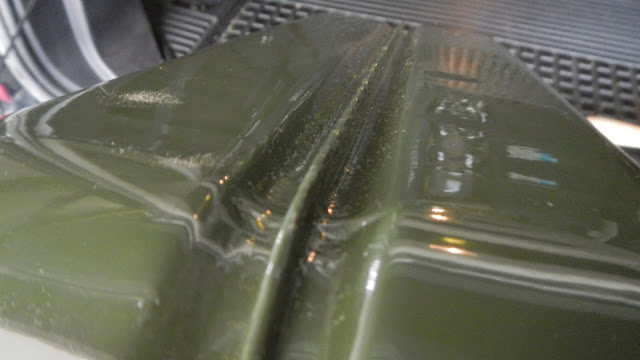 Each can is made with two stamped pieces of metal welded together.  Unlike American counterparts with rolled seams, Jerry cans' welds are continuous and where the two pieces of metal met it is recessed ensuring the can will not leak from the welds weakening from constant abuse and impacts from rubbing on the ground or stacking. The recessed gutter also allows the can to expand in changing pressure or hot environments. 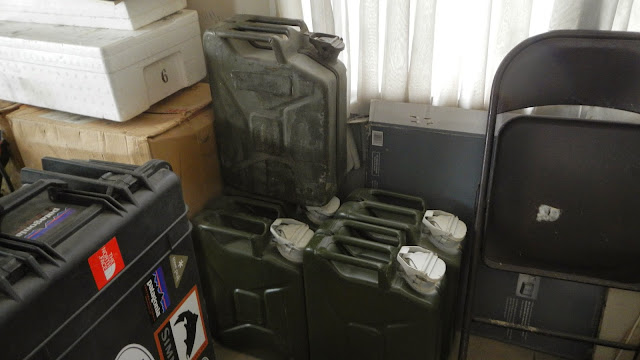 To optimize space, the can is designed to be stack-able for easy transport and storage.  The wall sides are flat and reinforced with strengthening ribs that are indented into the steel so not to inhibit stacking. 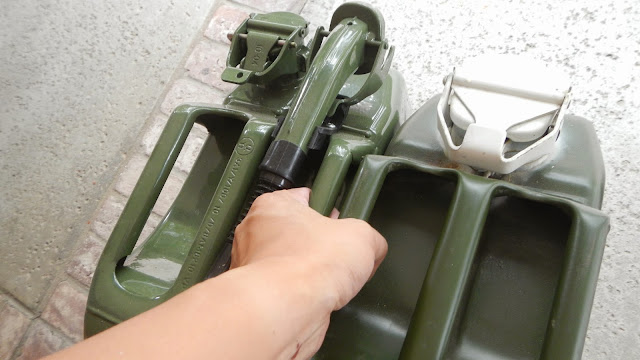 Another unique feature the three handle design.  Unlike previous fuel containers with single handles, the three handle design allowed more flexibility of carry.  One man can carry each can from the middle handle.   The outer handles made it possible for one to carry two empty cans at a time with one hand or allowed two people to share the weight of a full can. 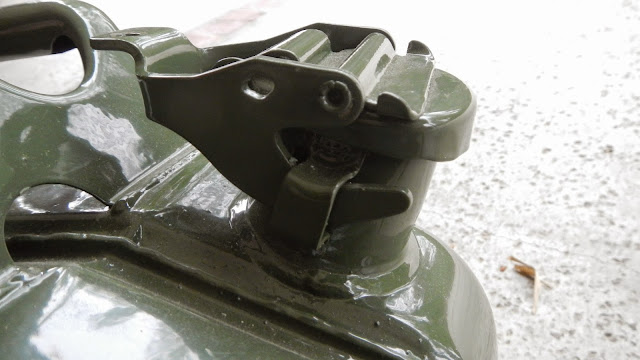 The lid mechanism is a closed via a cam lever that unlike threaded counterparts do not leak fuel nor do they escape vapors.  When pouring the lid will not fall and impede or interfere with the pour.  Another noteworthy feature is the internal breather that not only prevents gurgling and splashing but increases the speed at which the container can be emptied.  As a safety precaution on most commercial cans a pin prevents accidental openings. 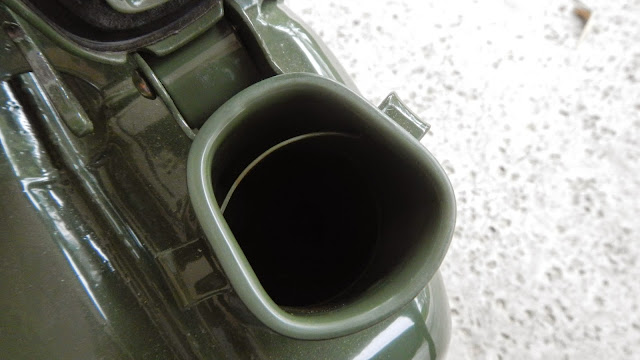 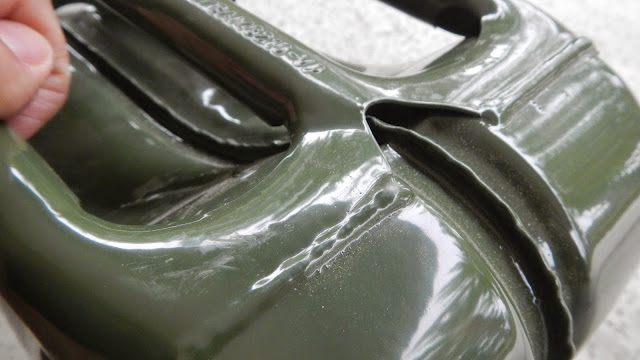 A word of caution for buyers of Jerry cans, beware of imitations.  Very poor imitations.  Most come from China and are not worthy of your hard earned money.  You do not want fuel leaking in your truck, so buy legitimate NATO cans.  One tell tale sign is the recessed gutter and continuous welds (not spot welded). 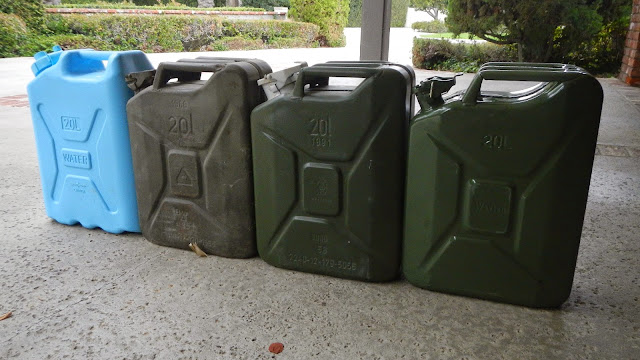 Not too long ago the US army adopted plastic Scepter cans.  I'm not sure why the went this direction but it maybe the fact that plastic doesn't explode in fire.  Scepter cans are threaded and therefore will leak.  Not only that but in changing barometric pressures the cans can seize up and will require a wrench tool to pry it open.  I have some Scepters as water cans, they are okay but steel NATO cans are superior.
Posted by gourmetsportsman at 5:37 PM 3 comments: