Day Four: Fishing in a Volcano 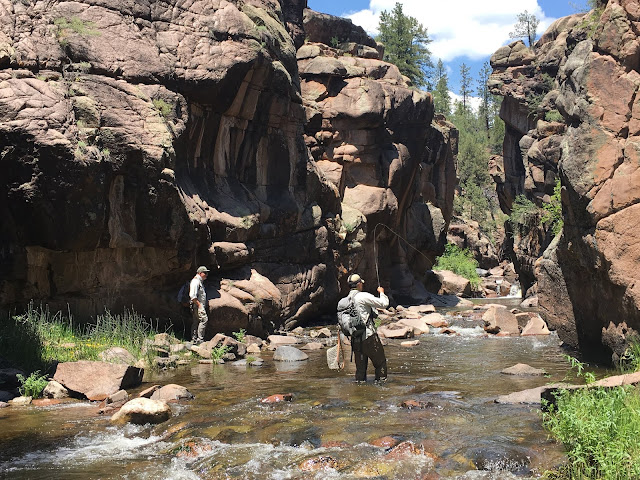 With Apache and Gila trout checked off the agenda and both fish added to the species caught list, my priorities moved on to catching a Rio Grande cutthroat.  While I planned and researched very diligently for the first two days in order to catch those two rare natives, the next leg of the trip I did not put as much thought into.  I figured that there were enough fly shops in the next areas that we could wing it.  We did have a vague outline of what and where we wanted to fish but no concrete plans.  Also coinciding with a late runoff season any plans we made would most likely be changed once we got up there. 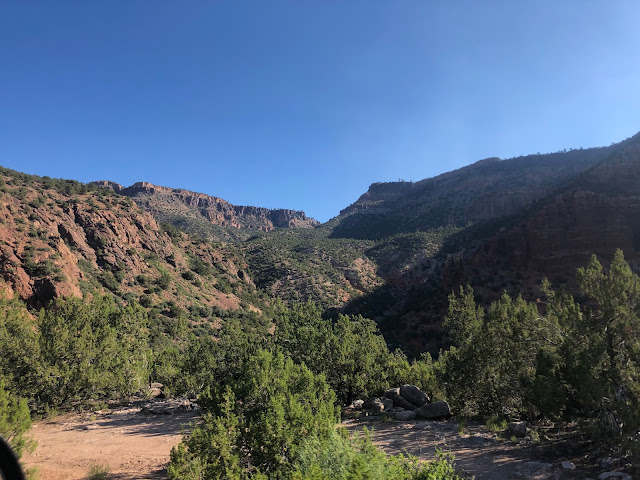 So I was glad to connect with Curtis who gave us the 411 on all the stream conditions.  Many of the planned New Mexico waters we wished to fish were scrapped particularly those north of Santa Fe.  One on the agenda was entering the Valles Caldera National Preserve.  This wasn't a priority for me but was a priority fishing location for my buddy Kelly as he is a geologist and wanted to see the  place.  I'm glad we went.  It's a spectacular backdrop when wetting a line.  Unfortunately some of the roads to the prime waters he wanted to fish were closed.

The night before we made our way out of the Gila Wilderness and took the long drive north.  With spotty at best cell reception I was in contact with Curtis on and off who gave us some camping options and let us know of the idiosyncrasies of New Mexico dining.  Restaurants usually close on Mondays or they close early so we needed to high tail it to Albuquerque to make dinner.  There would not be too many options along the way.  New Mexico food was on the agenda and I wanted to see what all the fuss was about these New Mexico chilies.    Curtis gave us some local eats we should check out unfortunately either they were closing early before our ETA or they were closed.  I did a quick google search for some options and choose one.  We weren't impressed.  After a long drive we decided against camping and just got a motel. 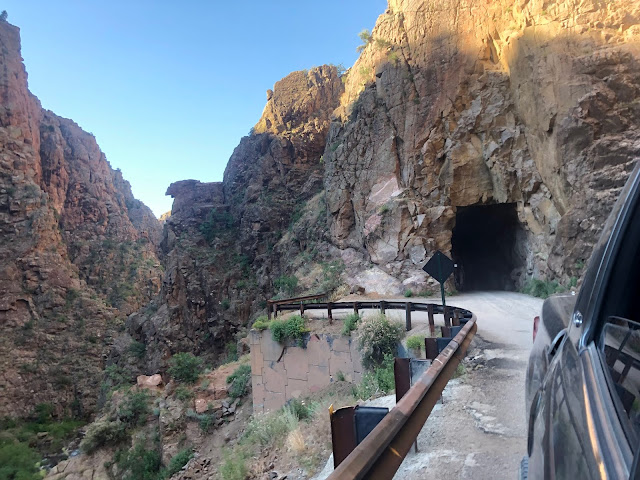 In the morning Curtis met us at the motel.  After brief introductions we took off to the Indian gas station for fuel and breakfast burritos.  I'd ride with Curtis and Kelly followed behind.  The drive to the preserve would be about an hour and in that time Curtis played travel guide let me know of the all interesting facts of New Mexico life from Indian history to politics to the fishing.  We'd stop at the Indian Information Center so Kelly could park his car safely for the day before jumping on board Curtis' truck. 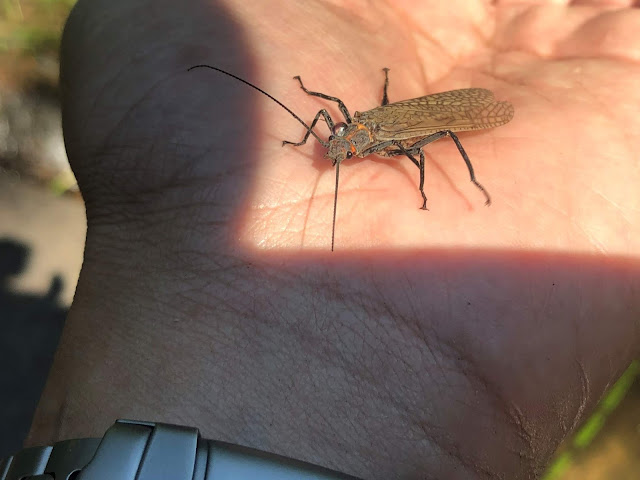 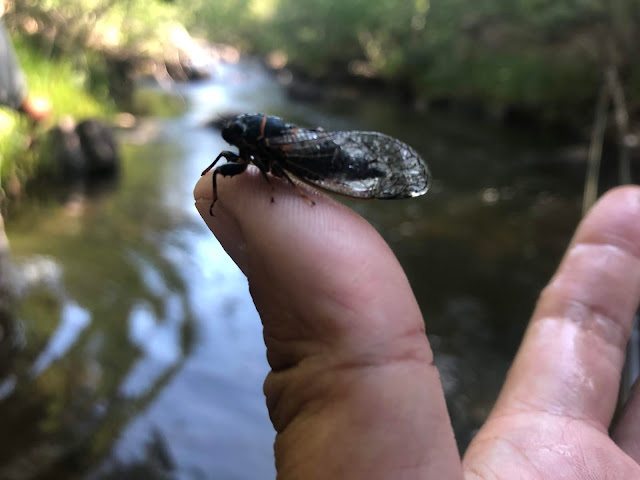 It wasn't long after that we were parked alongside the road rigging up our gear.  Once finished Curtis lead us down the canyon to the water.  After one or two casts I was already on fish.  Small salmonflies and two types of cicadas were on the menu this day.  I was fishing my favorite black dry fly this time in a size 10 and in a NeverSink version.  It would be a good representation for the smaller of the two cicadas present.  According to Curtis the bigger of the two cicadas makes the buzzing noise we are all accustomed to hearing while the smaller one (pictured above) had more a cricket sound. 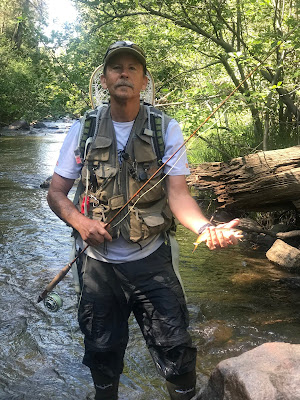 The first section was canopied somewhat with trees but it didn't impede casting.  It would open up the further upstream we went.  I would be given the honors of fishing the first hole.  I managed a rise on one of the first few casts but it popped off before landing him.  Within a few more casts I got my first to hand.  A dink brown.  "That's the smallest you'll see.  That's a rarity" said Curtis.  Quite a grand accomplishment but not really what I was looking for.  We were assured that the fish get bigger the further we go.

We moved up to the next hole for Kelly to take over.  Fish are plentiful here we spooked several just moving from spot to spot. It wasn't long before Kelly would get his first brown.   Much of the day it would be like this.  Fishing here is stress-less and easy.  It's good fun.  All fish were taken on dry flies for Kelly and me.  Curtis was using a dry dropper combo. 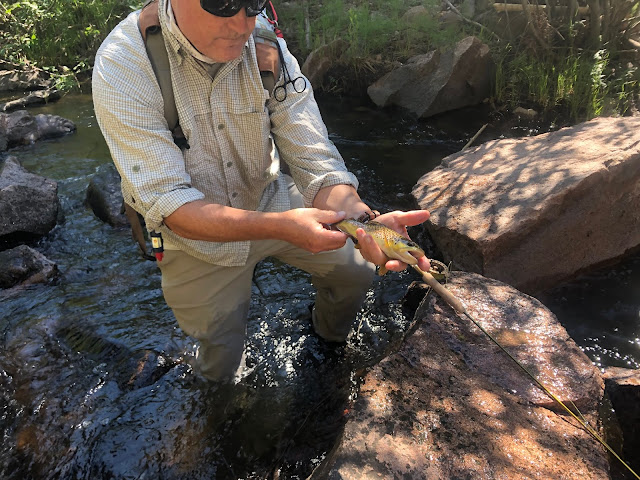 Curtis was up next and he took his brown after a few good drifts.  Much of the day would be use hopscotching each other taking turns fishing upstream. 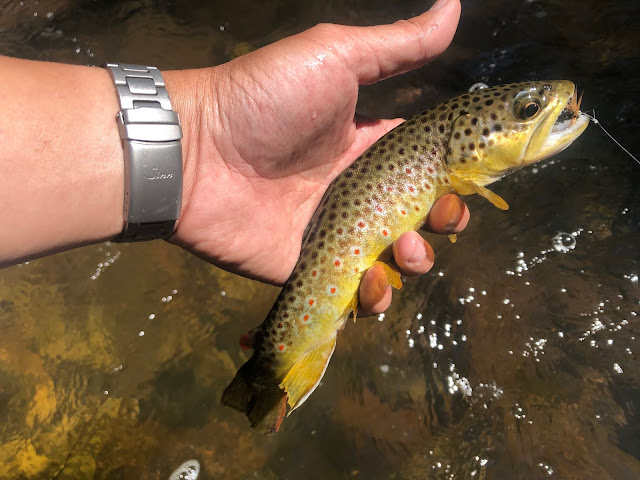 For relatively small water this river has some nice fish.  Most were in the 8-12 inch range but a few were in the 14 range.  There are fish even larger Curtis told us. 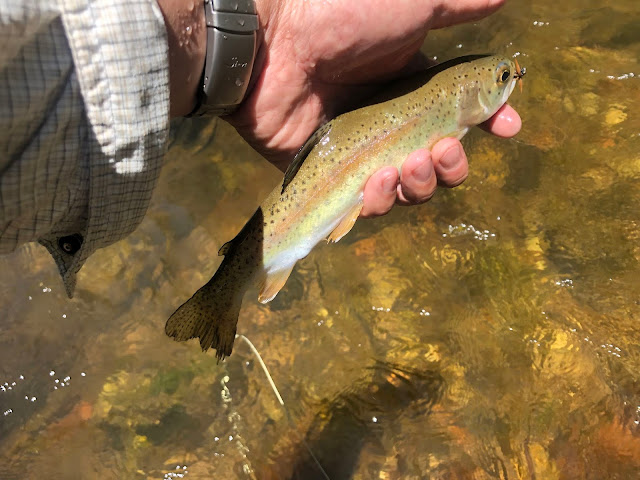 While mostly a brown trout fishery I did managed a rainbow which according to Curtis is a rarity.  These rainbows are actually stockers that swam downstream from a lake 7 or so miles north.  Accustomed to our ugly DFG stockers, this fish was actually quite nice despite it slightly mangled tail fin. 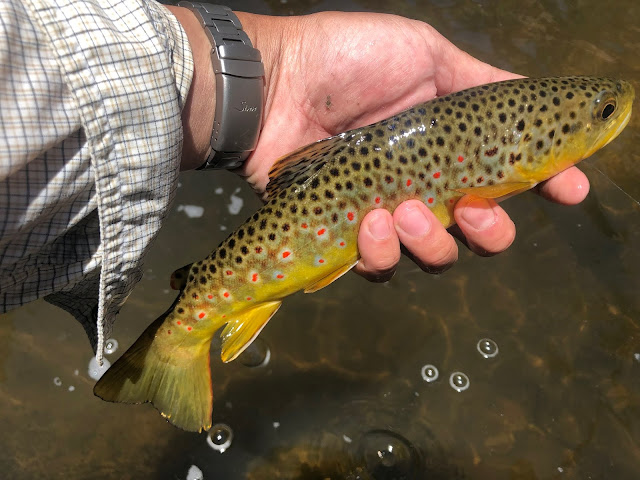 We'd fish upstream and on one section we'd help Curtis look for his custom made net that he lost his last outing.  When he told me that he lost it I was heartbroken for him as it was a special net made from a black walnut tree from his late grandmother's land.  The water was still too high to see if it was in particular hole he thought it may have dropped into.  He said he'd come back again when the water lowered and look again.  Hopefully he'll find it. 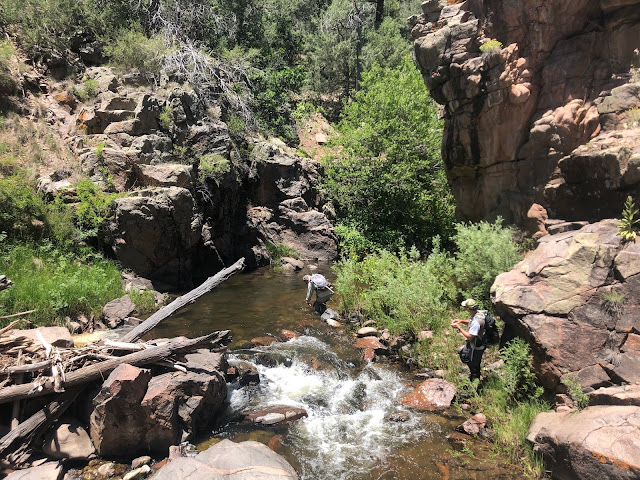 Not long after that I realized Kelly was missing his net!  At least his net had no significant emotional value.  It was only a Bass Pro Shop cheapie.  Little concerned I checked for mine.  Thankfully the foliage had yet to eaten mine.  Never did either.  I would have been pissed as I had just replaced the string net for a eco ghost bag not long ago as Brodin finally made available replacement bags in that smaller size. 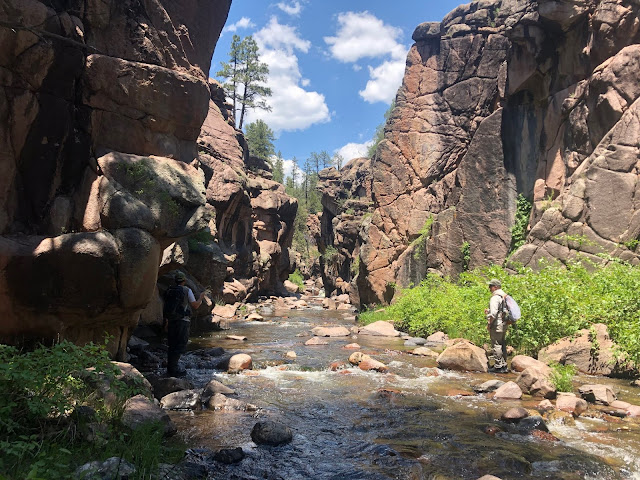 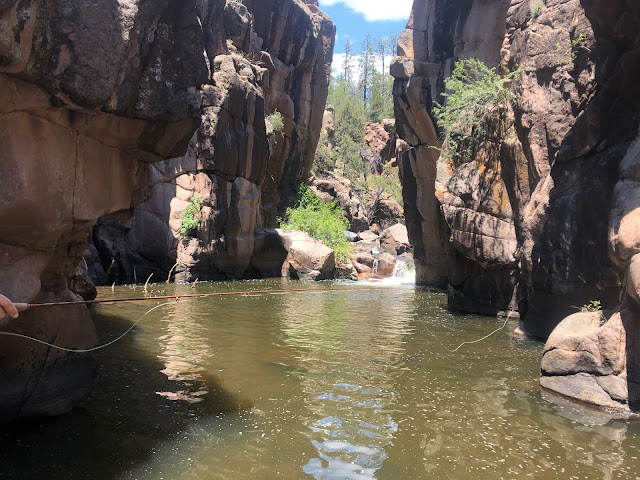 After hours of fishing eventually we reached the end of the line for us unless we wanted to swim.  It was a big long deep hole.  Kelly made a few casts in it and came up short.  I decided to take over and stripped out 80-90% of my line and started double hauling hail mary casts.  On the first I managed a very nice brown along the right side cliff.  I would catch two or three more at this hole all very good size before we backtracked slightly and made our way up the cliff side. 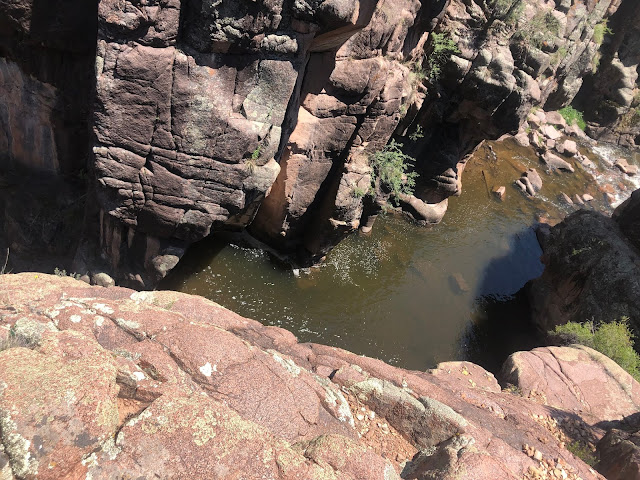 Once above we looked down on the hole and the areas that I caught those fish.  I got my first fish at the indentation at the left side of this picture while stand on the submerged boulder which is slightly shaded on the very right of the photo. 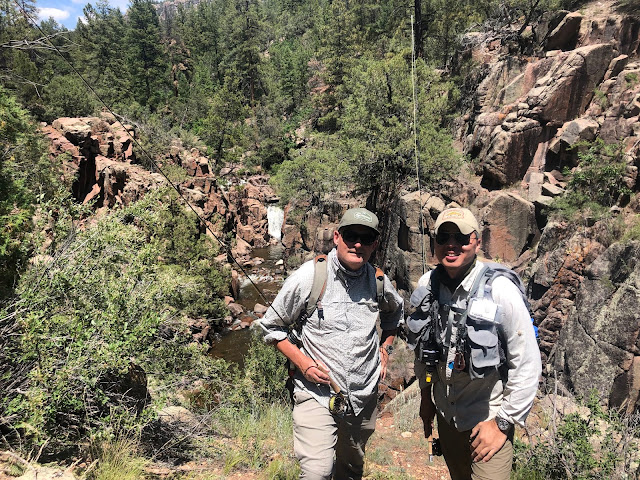 There is a waterfall just past this hole and we took pics and headed out for a streamside lunch. 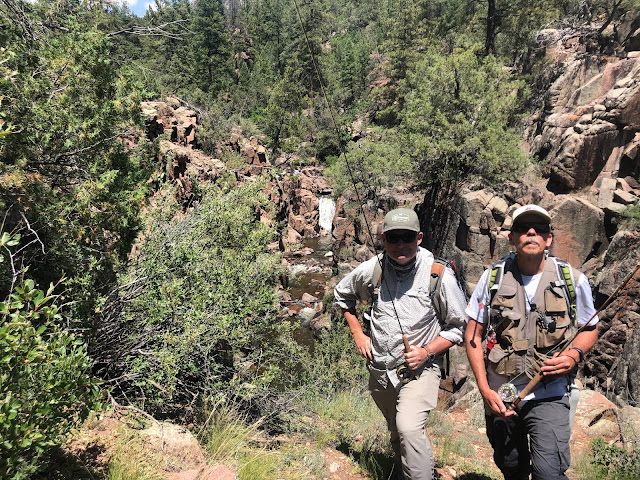 On the way out Curtis gave us the tour of the Caldera and let us know where we should camp and where to fish nearby if we wanted to catch a Rio Grande.  This was one of the other places Curtis thought to take us but decided against it. 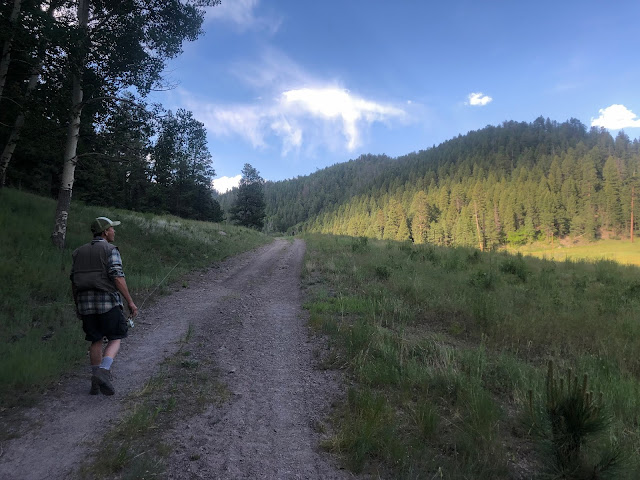 After being dropped off to our truck, we headed back up the mountain to the fish for cutties.  Curtis left us with detailed instructions on how to get there and where we should start fishing.  He said walk about a mile or so and once you hit a particular landmark begin fishing. That's where the cutthroats will be he told us. 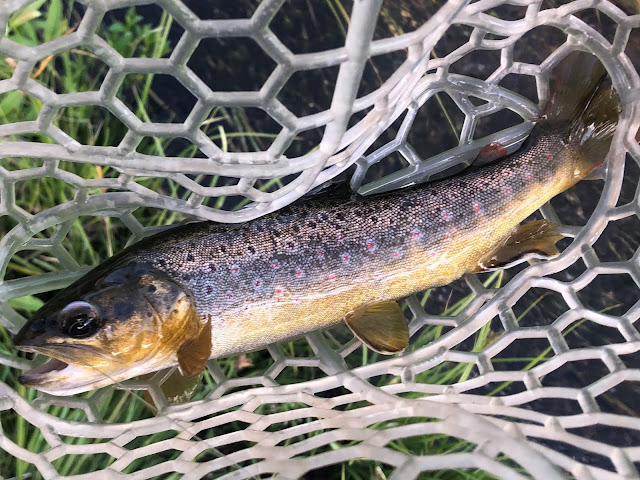 We had a maximum of a couple hours before the sun was to set.  Half way down the trail I asked Kelly if he'd brought his headlamp.  No he said.  Neither did I even though I was thinking about it just before leaving the truck.  In my haste to get to the water I forgot to grab it.  So we'd have to make sure we'd give us enough light to make it back to the truck. 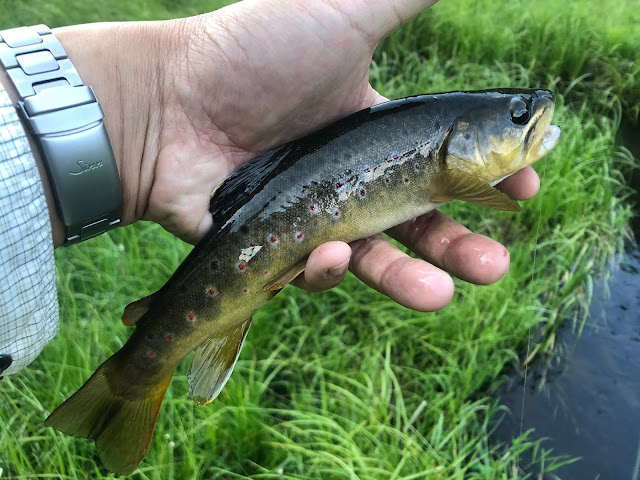 After about what I thought was a mile I started fishing having forgot about the landmark.  I'd get fish after fish on my size 10 dry fly but none were cutthroat.  I was starting to get irritated.  I finally managed a cuttie but choose not to net it.  It would eventually pop off my fly when I tried to get a pic of it.  Now I was pissed.  The plan was for us to fish here and get my cuttie and leave the next morning for the San Juan.  After losing the fish, I caught up to Kelly and told him somewhat angrily "we are coming back tomorrow morning!"  We continued upstream and discovered the landmark.  I was now even more pissed.  No wonder we weren't getting Rio Grandes.  We weren't even fishing in the right area. 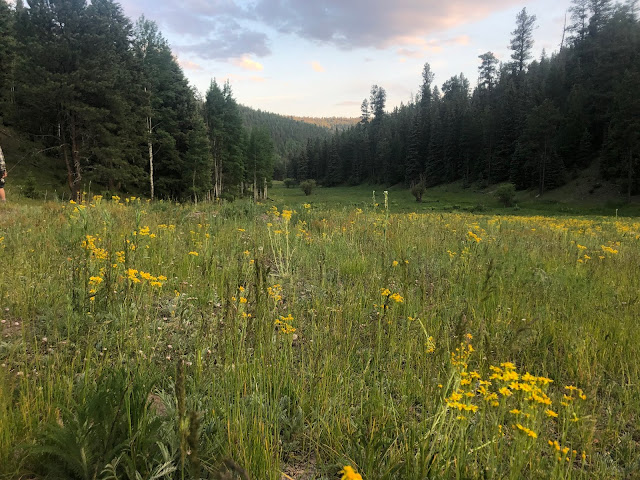 With light waning, I bolted past the landmark and started fishing trying to get at least one to rise but with no luck.  I managed to get about 300 yards before heading back as we were quickly losing light. 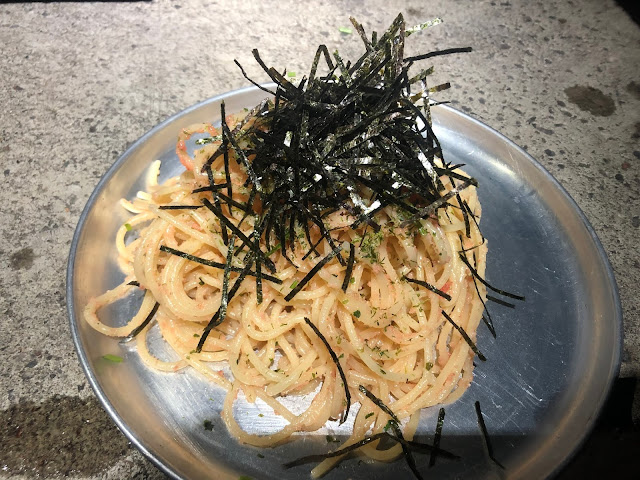 Finding the campsite was a bit of a cluster and by the time we made camp I was beat.  I did manage to make us a simple dinner of mentaiko pasta before we crashed into our sleeping bags.
Posted by gourmetsportsman at 7:54 PM